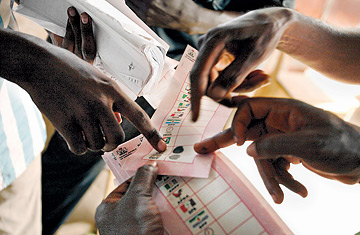 “We have had governance and leadership better since 1999. There is room for improvement they say, all things been equal, you keep enjoying the pain. Sad, the body (electorate) could no longer manage the pain, they get ripped day by day. Every calculated opportunity to heal the wound is worsen by the political leaders“.

It is no longer a certain feeling. It has worsen beyond despair of what and how the injury got to us. Sordid explanation would be inextricably unsuitable except the injury heals. How we continually laugh in rigour of bitterness, when there is distress phone number of choice baffles.

To some, it has been awesome. We have had governance and leadership better since 1999. There is room for improvement they say, all things been equal, you keep enjoying the pain. Sad, the body (electorate) could no longer manage the pain, they get ripped day by day. Every calculated opportunity to heal the wound is worsen by the political leaders. They are at cynosure of our ordeals probably because they have never felt the brunt of hardship, and so condemn us more to another hardship every four years through stealing at the poll. This time, electoral stealing.

Thereby, the pain was transmitting sadness that won’t go away putting your only trust in the prescribed medicine or acerbic injection assembled by those trained to relief and possibly paralyse the symptom that grows pain in your body. Such right you get as proud citizen of a country like mine Nigeria, when you must be seriously ready for the long television appraisal and appreciation for what you daily paid for.

Am sure this is not opening misgivings. Is anything free in Nigeria?  Referring to Nigeria, my Father’s land. That nourished land that harbour hopeless people in hopeless situation despite the milk and honey enjoyable only to the class of people your only choice puts ahead of you.

By our choice, decisions are made. Politicians are elected as political leaders.

Basking in the euphoria of that ugly pain is not what irk. Rather, the fury of not seeing hope and gladly tides in what your choice and decision fetches you. What a furry state.

Scenarios like this kills before the real death. This, in my open resolve must have informed, triggered many revolutions filmed and recorded for us as overly by economic balanced nations. Revolution is a gospel I hate. I have never hide that, not for a minute. But, that apparently form our strong opinion of surviving the shackles of impunity.

Talking of Scenarios, have we not had it farther and stronger since the start of the much celebrated civil rule. We were brandished to believing in the power of the good (beautiful points made above the bad (ugly); whereas, the beautiful was, is, would never be at the rescue for any suffering-put Nigerians. Remembering the good points, free-to-air communication appliances that we pay bourgeois amount of money to get and later suffer another brain damage when stolen at Mushin, Oshodi, Apete(Ibadan) and sold at Computer village in Ikeja or Fayose market in Ado cheaply at a very disgusting price.

Proceed incurred from such theft is basically meant to feed a whole family that likely have graduate or young Nigerians that wouldn’t afford having standard education owing to lagging high tuition. Who do you blame? The thief? Graduate of many years that have about five younger ones to cater for.  Having walked roads, streets and routing companies for paid-checkers job to sustain his immediate siblings to no help. Does he deserve to die of hunger? Have heard “survival of the fittest”.

Oh! It is also the fault of the owner of an expensive gadget, who got his handset to reaching out to families in the village since ours in this country is no system is working palaver. When last do we receive letter, mail from far reaching people without having had to pay more before the DHL, FEDEX of this world can suffix you. When?

When Obasanjo led government introduced an “alternative” not a replacement our long telecommunication outfit, NITEL, was privatised and later rendered useless by other competing network providers. The last time I checked, Nigeria Communication Company saddled with regulation responsibilities still assured the last has not been heard of our local communication system. Appalling vision 2020. What commensurate good are we talking about?

Away from the good. It is also a known fact that nothing good can ever come from the bad. Our system in Nigeria is bad and routinely rotten. The good is not good because it was good from bad. Likewise, the bad.

The bad are though not bad to those milking from the strong efficiency of the bad policies, ugly programmes and poor implementation. You know them? They are fearless opportunists who make basic human rights vulnerable to Nigerians. Yes, they are the one representing your interest. The first to come out criticising the odds that won’t favour them. Linking that to the muslim/muslim noise they are making of our religious crisis. Sheer fanatics!

The corruption cases that didn’t fit as common stealing presumably irk more. It make our leaders, those elected by you unanswerable to us. Missing $20bn from coffers of NNPC, $9.3m arm deals with our southern neighbours and Presidency taken responsibility of encouraging notorious militant to do the business of our security chiefs. Cases of pension scam, capital market fraud, Education trust fund scam, the smuggling of millions of dollars abroad any time our President visits countries of the world.

The insurgents scare, heavy weight shield, many unresolved vows to mention a few.

Problems and issues solved are not making good Newspaper headlines. Rape on our judiciary by a political heavyweights, especially the one involving a Governor does make our lord judges honour unappealing to us.

All of the politricks and unending intrigues of usurping and amplifying executive rights above other tiers of government independence by the leaders we enthroned by our collective votes gives an express interpretation of the choice we come, beautiful or ugly.

The other time, in a Northern state. The leader of the arm of government that enacts law for the good of common man in desperation to taste power throw caution into air and left the good people of Adamawa in confusion that would last until another arm had to considerably interprets the law better. In honesty, the People Democratic Party led federal government dutifully surprises the world enforcing the judgement of the court under 5hours. Such glory won’t last.

Hon Aminu Tambuwal, having fulfilled the requirements openly decided to annuls his membership of a party that has thrown Nigerians in darkness. That, becoming his choice, was made to pay the price of leaving biggest political party in Africa. Who dare?

His defection tricks as sweet as electoral victories was greeted by another constitution flaw. The police, an organ of the executive took law under heels, deviate from enforcing the law to interpreting laws. Its however, a calculated attempt to deceiving Nigerians. Good! Good-luck is seemingly getting the knocks of the another confronting over-play.

Now that General election reality is gradually gathering sudden momentum. The power play has begun. The PDP are leaving no room for defection. Try it, you’ll face a rude shock of your life. Ask Ameachi, Nyako and Tambuwal. The opposition are either way not having it fairer.

The ‘peoples General is back in the race. Trust Nigerians, they are good student of history. The memory of his promises especially the “no ambition” is been given a facelift. Yes, I have read the plea of his cronies and faithful. This is an underlining paradox at the spate of impunity if left again in care of jesters, likely to become sophisticated. And since revolution is not a great ideal of an option. The last shot of General Buhari will do. Pardon his manners, he is a father that must hack up to the yearning of his people. To openly buttress this is the fact that we still have a politician with high sense of responsibility above my generation that still commands over-hauling integrity of getting a loan to obtaining a nomination form.

Good for Nigerians. Where do we start? But don’t forget, we become the choice we make either good or bad.

From 1999 till date, the activities of our political leaders especially the angle of turning our coffers to their private use of acquiring wealth with ‘I don’t care attitude is an integral factor that must inform our choice comes 2015.

Not religion, not ethnic but personality, programmes as effective, dependable, reliable and considerable may offer a formidable escape route. Remember, this is another to time to heal the wound and not only to stop the pain.

How to Turn Tough Criticism Into Serious Success

The Many Neutral Perspectives to 2015: Part 1

The Rise of Social TV: How Social Media Is Amplifying TV Advertising