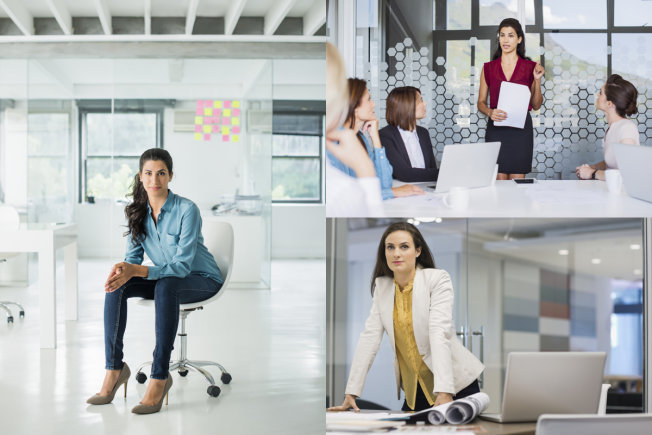 “Many women feel uncomfortable speaking up in meetings where there’s only a handful of other women. ​However, holding back ideas can have negative consequences for you and your company. ​”What I always say to women is [your company] needs your piece of information, or they might make a bad decision,” Heath says. “You have to put what you know about the issue into the conversation so that a better choice is made.“

Despite high-profile executives like Sheryl Sandberg and General Motors CEO Mary Barra proving women can lead just as well as men, many young women are still being overlooked in the workplace. According to a 2011 article in the Harvard Business Review, many women do not speak up or feel confident at work, leading them to be passed over for potential promotions and raises.

Kathryn Heath, one of the article’s authors and managing partner at the consulting firm Flynn Heath Holt Leadership, says this insecurity could stem from a lack of female colleagues or bosses.

“If you are the only woman in the room, it is hard to be confident,” she says.

Michele Gelfand, psychology professor at the University of Maryland​, suggests the discomfort women feel when ​negotiating for higher salaries and promotions in their careers occurs because they are trained to be nonconfrontational. It’s not enough for women to simply be good at their job, she says – standing up for themselves is also key to becoming the boss. ​

“Even if you are working hard and doing well, you really need to be stepping up to the plate and asking for things,” Gelfand says.

Here are eight pieces of career advice for young women who want to beat the boys and become the boss:​ ​

Promote yourself. Although self-promotion is a key step for women who want to get noticed in the workplace, many of them feel uncomfortable speaking out about their accomplishments. ​
​ ​
“[In]​ their early life, girls have been rewarded for following the rules and not speaking out,” says Jane Finette, founder and executive coach at The Coaching Fellowship, a coaching center for young women leaders. “It’s just not something girls have been trained to do.”

Working hard at your ​job isn’t enough to get noticed, ​says Peggy Klaus, author of “Brag!: The Art of Tooting Your Own Horn Without Blowing It.” Young women should take initiative and tell their colleagues and bosses about tasks they’re working on, upcoming projects, obstacles they have overcome and their overall value in the organization, she says.

​​”You really do need to let your boss, your boss’s boss [and] your colleagues know what it is that you are doing,” Klaus says.

Write down your achievements. To help young women remember all those accolades in their careers, Jenn DeWall, a Denver-based ​certified career coach​, recommends keeping a running list of successes. She says this document will help you remember your accomplishments when it’s time to advocate for a promotion or apply to jobs.

​”We typically have so much going on,” DeWall says. “… we sometimes forget to validate our accomplishments and achievements.”

Even if you have not been in the workforce for long, the list will help remind you of your value to employers. “Do not just think that because you are young in years that you do not have things to offer,” Klaus says. ​

Ask for more. Negotiating is one of the most challenging tasks for young​ women professionals. Men negotiate more often than women and feel more comfortable doing it, according to Gelfrand’s research. This poses a major problem for women, she says, given that negotiating is key to advancing in your career.

“Even if you are working hard and doing well, you really need to be stepping up to the plate and asking for things,” she says.

To become more comfortable with negotiating, Gelfand suggests women find out what is negotiable in their workplace and proactively ask for more. “I would definitely recommend women take this skill as seriously as they do finance or accounting, because this is really going to help the bottom line of their salary and of their advancement,” she adds. ​


Find mentors. Women should not be afraid to seek the advice of others to climb the career ladder, Heath says. ​

She suggests gathering a group of close advisers who can help you make business decisions, build a career path or just provide support. This “board of directors,” as Heath calls it, could include professors, family members, colleagues and even former bosses. “Do not try to go it alone,” she says. ​

Gelfand​ stresses the importance of mentors, not only for professional guidance, but for emotional support. “Sometimes women may feel they have to prove themselves on their own, but really navigating the workplace requires having strong mentors,” she says.

Take risks. When it comes to carpe diem, men are much more likely to seize the day (and job) ​​than women. A 2008 Hewlett-Packard Co. report ​found women will apply for a job if they believe they are 100 percent qualified, yet men will do so if only 60 percent qualified. ​ ​

Klaus says this discrepancy is due to women having the tendency to underestimate their value.​ “I have seen this time and again where there is an opportunity in a company, and the woman will be very qualified but she will second-guess herself,” she says.

Young women should pursue job opportunities even if they feel unsure of their qualifications​, Klaus says. ​She also urges women to know their strengths, and use them as leverage when applying for a better job or negotiating for a higher salary.​

Make strategic choices. ​”Too often, young women early on in their careers are so eager to ​[prove] themselves that they take on too much,” DeWall says, adding that they often say “yes” to every project that comes their way. ​​Men, on the other hand, are more selective. They typically choose highly visible projects, DeWall says, while young women take on too many projects and are therefore less likely to stand out in one area.

She suggests young women ask themselves, “What will I gain from this?” before taking on another task. If the project does not appear to help advance​ ​your career, and you already have enough tasks, do not be afraid to say “no.”

Make a game plan. Many women feel uncomfortable speaking up in meetings where there’s only a handful of other women. ​However, holding back ideas can have negative consequences for you and your company. ​”What I always say to women is [your company] needs your piece of information, or they might make a bad decision,” Heath says. “You have to put what you know about the issue into the conversation so that a better choice is made.”

Heath suggests women come to meetings prepared and with suggestions in mind. Get your voice heard early by making small talk with colleagues, she adds, so it becomes easier to share ideas later in the meeting.

Use assertive language. The language women use can often be a barrier to their success. For example, DeWall says women tend to end sentences with “Is that OK?” which could convey insecurity. “They might present a proposal to a manger, and instead of saying, ‘Here it is,’ they will completely undermine all the work they have done and ask, ‘Well, give me your feedback,’ or ‘Is this good enough for you?'” DeWall says.

Young women can convey confidence in the workplace by using an assertive tone with managers or peers, DeWall says. For instance, instead of asking to do something, say you want to do it. By changing language or demeanor, women will both appear and feel more self-assured.

As DeWall puts it: “Women should stop waiting to be asked and be more assertive and confident in who they are.”

Governance: My Nation, my Responsibility