Boko Haram: Something Is Not Right – Michael Egbejumi-David 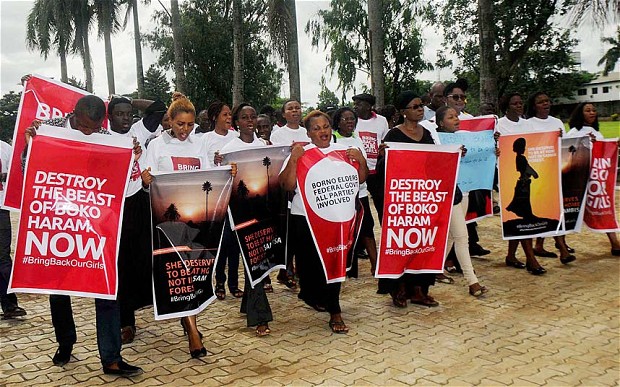 “All I know is that the North-East is being used as a cannon fodder and a laboratory in a macabre test of political wills in Nigeria. Look at the huge money being spent to keep Boko Haram in business. Imagine the difference it would have made on the lives of the people if that same money had been spent in the same region on youth employment, training and the provision of social infrastructure. But would any government deliberately allow a section of its domain to go to ruins for electoral purposes; and would we not automatically treat as suspect any presidential candidate who campaigns on the theme of restoring security and bringing Boko Haram to an end?“

In the early hours of April 14, 2014, Boko Haram militants invaded the sleepy little town of Chibok in Borno State. They made off with about 234 schoolgirls, and then the school was razed to the ground.

Expectedly, the Nigerian military and security operatives descended on the town and its environs in what was supposed to be a formidable military/rescue operation.   However, there continues to be incessant Boko Haram operations and mayhems in and around that general locale.

On May 5, in an attack lasting several hours, Boko Haram attacked a village used as a base by our security officers in the search for the missing schoolgirls. On May 13, there was an attack on three villages; June 2, three communities in Gwoza were sacked. On May 20, three villages not far from Chibok were attacked. Between May 29 and June 5, six attacks were carried out and 20 women were abducted. On June 3, Boko Haram attacked four more villages; June 10, 20 more women were kidnapped from a nomadic settlement near Chibok. June 13 to 19 saw two more attacks. July 4 to July 10, four more attacks. On August 6, Boko Haram attacked Gwoza on a large scale. Its men reportedly arrived on motorcycles and up to 50 Toyota Hilux trucks. On August 11, during attacks on local villages, 97 men and young boys were kidnapped. In all of these attacks, hundreds of innocent people were killed, homes and properties were destroyed. Quite a few of our military personnel lost their lives too.

All of these attacks took place in the general Chibok – Gwoza axis, an area supposedly suffused with military presence, and under a State of Emergency. Yet, Boko Haram continues to operate there and elsewhere with impunity. Clearly, something is wrong. It is akin to Al-Qaeda never leaving Manhattan in New York immediately after 9/11, and just kept going back and bombing “Ground zero.”

We are talking about the Nigerian military here; a body that has acquitted itself excellently well since the 1960s. A force that has conducted successful operations in much more volatile environments – from the Congo to Sierra Leone. And now we are to believe that this same force that has garnered even more experience and more expertise over time is suddenly unable to see off a ragtag band of criminals? Something is not right.

That is not all.

One Stephen Davis recently went to town with revelations about Boko Haram. Davis, an Australian, is something of a “hostage negotiator.” He had invited himself to Nigeria on the back of the Chibok schoolgirls’ abduction. After about four months of negotiations, the girls are still in captivity; however, Davis cut loose on the alleged sponsors of Boko Haram. He alleged that Ali Modu Sherrif (a former Governor of Borno State), General Ihejirika (a former Chief of Army Staff), and a couple of Central Bank of Nigeria officials (one “who recently left the bank,”) were all in on it.

For me, the surprise is the Ihejirika and CBN links. Now, I don’t know whether the good Reverend has been duped or not, but if I were Ihejirika, I will insist on an immediate and thorough investigation to clear my name.

As the COAS, Ihejirika was a real thorn in the flesh of Boko Haram. At one time, he shut down the telecommunications network in the North-East. That began to strangulate Boko Haram until some elders and politicians up there protested. Ihejirika then went after the insurgents with a singleness of purpose that caused the Northern Elders Forum to cry “time out.” The NEF claimed that the General was committing “genocide against Northern youths.” They prevailed on President Goodluck Jonathan to have him removed. Not satisfied, the NEF promised to drag Ihejirika to the International Criminal Court at The Hague to face prosecution for human rights abuses.

Sherriff is a different kettle of fish. After his electoral victory, Sherriff didn’t give the boys the type of Sharia they craved; instead he gave them a short-lived commissioner. To add salt to a religiously-fermented injury, Sherriff was allegedly complicit in their leader’s earlier-than-planned coadunation with his afterlife virgins. The battle line between the two camps had been drawn ever since.

You could see why – assuming the people with whom Davis have been hanging out wanted to be mischievous – Ihejirika and Sherriff’s names would be top of the list of possible Boko Haram sponsors.

But who knows. The whole thing gets messier every day. Running for elective office in Nigeria is very expensive. The speed with which Ihejirika jumped into partisan politics so soon after his controversial stint as COAS has not helped matters either.

All I know is that the North-East is being used as a cannon fodder and a laboratory in a macabre test of political wills in Nigeria. Look at the huge money being spent to keep Boko Haram in business. Imagine the difference it would have made on the lives of the people if that same money had been spent in the same region on youth employment, training and the provision of social infrastructure. But would any government deliberately allow a section of its domain to go to ruins for electoral purposes; and would we not automatically treat as suspect any presidential candidate who campaigns on the theme of restoring security and bringing Boko Haram to an end?

Clearly, there’s more to this whole Boko Haram business than meets the eye and things are beginning to point in uncomfortable directions. And as if all that isn’t troubling enough, the Federal Government owns up to a dubious act of money laundering and/or a covert arms purchase deal gone bad, using – of all things! – the private jet of the president of Christian Association of Nigeria. That just puts the cherry on the parfait, doesn’t it? Yep…something is not right.

How To Use Tension And Conflict To Create Breakthrough Products

Why I Stopped Firing Everyone and Started Being a Better Boss

7 Daily Habits That Can Make You More Successful at Work