Don’t We All Encourage Corruption In Nigeria? 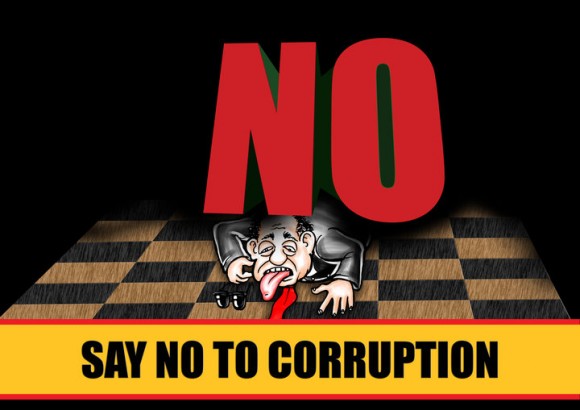 “The truth is that be it in small or big fractions, we are all corrupt and have all taken turns in plunging Nigeria into deeper plight and suffering. This will continue until we free our minds from endless quest for who should first remove the speck or log from the eyes. The reality remains that we are blinded by a tiny speck and in some cases by a log of wood—blinded by self righteousness and impunity; and unwilling to see the door of repentance and right doing.“

WHILE declaring open the 54th annual conference of the Nigerian Economic Society in Abuja on September 17, President Goodluck Jonathan made the assertion that all Nigerians encourage corruption one way or the other. With this pronouncement, all hell was let loose in social media, newspapers and society groups in a shallow spirit of nationalism. They engaged in a conference of finger pointing and appropriation of corruption to public offices, politicians, institutions, political parties, religious segments, pressure groups and persons.

But are we being sincere? Maybe because of the weight of his office and as the defender of all that is decent and high in our people, and as someone who is expected to see the good in his people and raise hopes in a moral tone, the President should not be the best person to make such a statement. Once that comes from him, it means he is putting the stamp of authority on statements, sometimes careless, that Nigerians are corrupt. But then, that the President is banned through an unwritten code to stay off such pronouncements does not mean Nigerians cannot upbraid themselves or debate their integrity standing.

The fact is we are often quick to point fingers at politicians, accusing them of killing our country, but it takes our apathy, silence and acquiescence as citizen-electorate to get them into power. A fraction may be blamed on weak institutions in the country, but we know that weak institutions are occupied and run by people who are blessed with God’s gift of freewill. The truth is that be it in small or big fractions, we are all corrupt and have all taken turns in plunging Nigeria into deeper plight and suffering. This will continue until we free our minds from endless quest for who should first remove the speck or log from the eyes. The reality remains that we are blinded by a tiny speck and in some cases by a log of wood—blinded by self righteousness and impunity; and unwilling to see the door of repentance and right doing. Our churches and mosques; pastors, bishops and imams have sold their calling, in exchange for lustful nakedness, political positions and appointments, luxuries and empty pride. They have sowed hate, religious bigotry, tribal sentiments, disunity, financial irresponsibility, and laziness in the lives of their flock; selling immorality in its entire dimension in conformity with global trend; instead of preaching the truth of love, patience, dignity of labour, peace, forgiveness and zero tolerance for immorality.

Should it be the responsibility of the First Lady – Patience Jonathan, to preach decency in all our churches? Does it have to be the President to force citizens not to litter the streets, or to keep traffic rules? Should it be the Minister of Education’s responsibility to ensure that teachers and lecturers attend classes as and when due and give the students standard learning? Or see to it that children are fed with principles of respect, love, and the gains of hard work? Does the Nigerian Police have to be omnipresent to tell when the slightest crime is going on in every neighbourhood? Does Namadi Sambo, the Vice-President, have to hold a cane for civil servants to come to work punctually and carry out their tasks diligently?

During a visit to neighbouring Ghana for a conference in September, we learnt that most West African countries suffer a similar problem of growth paradox, promoted by bad governance, and a lack of political will. I was regaled by fellow conference participants and friends most of whom were Ghanaians with the impression that Nigerians were rough, and that most of the armed robbers that prowled their country were usually Nigerians, criticisms I absorbed with shame. But has that made me to adjust to be a better citizen and an ambassador of Nigeria? It is correct to say that Nigeria has all the resources to be the greatest in the World. Right now our country is neither growing nor developing.    Our problem may be at the centre, but then the centre would not hold without supporting components. We have to accept the truth that we all have fallen short. As a religious country, we should be in the best position to know that the first step to repentance and to get Nigeria on a fresh track towards real growth is confession of sins. We have applauded thief, given our hallowed traditional chieftaincy titles to rogues, and sold our votes (right and human dignity) for bags of salts and tokens to keep the body filled only for a while. Our ministries and technocrats have sold their professional ethics and integrity; lying and turning a blind eye to the true situation of the country.

The political parties are at it again, preparing for the 2015 elections. Rallies are being held, money is circulating and blood is being shed in the attempt to buy the integrity and power of Nigerians. We have to get it right. It is true that when poverty increases especially where crime is celebrated, doing what is right becomes too expensive to afford. Still we have to try to be better than what we are today; we have to overcome our selfish nature and teach our children the right way through our own daily lives and choices. We need to love Nigeria and save her the stress of bad leaders as well as followers. It is time to be brave, open up, speak and restore her dignity. The National Conference may be a gimmickry; a cosmetic play of words, but then it may just as well be that balm, that opportunity to re-arrange our thinking.

We must be encouraged with the words of Jerry Rawlings which go as follows: “If our people lose the courage to confront what is wrong then we become collaborators”. Samuel Adams says, “It does not require a majority to prevail, but rather an irate, tireless minority keen to set bush fires in people’s minds”. Lets repent of our weaknesses, struggle to be better fathers, mothers, children, friends, employers, employees, teachers and servants of the nation; responsible and accountable to one another – in sum better human beings. It takes weakness to conform to evil, but greater strength for good. Let’s save Nigeria, let’s save our future… let’s be brave, else Nigeria will collapse on us all.

The 4 Ps of a Successful Pitch

Application For Waverley–ORISHA Joint Masters Scholarship At University Of Oxford Is On!

7 Common Excuses We Use To Cover Up Failure