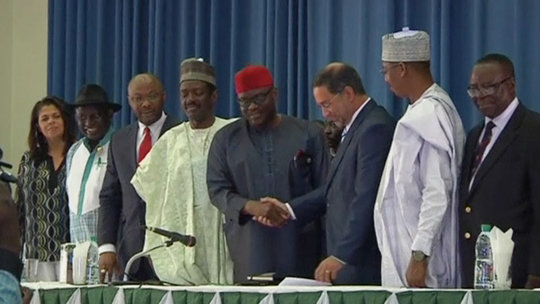 “The first and very important lesson to be learnt from this spectacular success in defeating the spread of the deadly disease is; it is of uttermost importance for every citizen irrespective of his/her profession to discharge his/her responsibilities effectively, judiciously and professionally without compromise just as Doctor Ameyo Adadevoh“.

Repeating the stories involving how the Ebola Virus Disease got into our country might not be much necessary for the message this piece is intended to pass across.

However, in summary, Nigeria had 19 cases of Ebola after an infected Liberian-American man named Patrick Sawyer flew into Lagos on 20th July 2014, and collapsed at the airport. Health care workers treating Sawyer were infected, and as it spread it ultimately killed eight people, a low number next to the thousands of cases and deaths in other countries.

You may wish to give credit to the Lagos State Government for her effort in combating the deadly disease, she is worth it.

You may decide to give credit to the health workers that confronted the disease professionally especially the heroine- Doctor Ameyo Adadevoh who lost her life in the struggle, they are worth it.

You may choose to give credit to the newsmen and woman, bloggers and journalists who gave public awareness and orientations about the diseases and how to control the spread, they are worth it.

And you may also decide whether or not to overlook the immense effort of the federal government in raising funds and putting the necessary logistics in place to control the spread of the disease, it`s your choice.

However, one thing is significant, and that is; every Nigeria irrespective of his/her culture, religion, region and political affiliation came together and addressed this scourge with unity.

Having achieved this, the World Health Organization (WHO) representative Rui Gama Vaz, speaking in Abuja yesterday (Friday, 20th October 2104), said it was a “spectacular success story”. He officially announced and declared that Nigeria is completely free from Ebola Virus Transmission after meeting the required 42 days period without any new cases.

We have seen that it’s possible to control Ebola. It’s possible to defeat it. So also are all other challenges we face as a nation- they are all solvable. If we applied the principle of unity, commitment, determination and seriousness we employed in defeating Ebola.

This is one big fight we all have fought together in a long time.

The first and very important lesson to be learnt from this spectacular success in defeating the spread of the deadly disease is; it is of uttermost importance for every citizen irrespective of his/her profession to discharge his/her responsibilities effectively, judiciously and professionally without compromise just as Doctor Ameyo Adadevoh.

Unlike Boko Haram insurgency which has lots of sympathizer and apologist, everybody was unanimously against the spread of Ebola and today the result is positive which means unanimously we can address all our challenges.

Additionally, it also shows that as a nation one of the biggest challenges we have in addressing and solving civic issues is the lack of unity. Which means if we`re united as a nation we can achieve great things.

Hence, if only and only if we can forget about our differences irrespective of our affiliations and come together as a nation to face all our challenges, we will have a lot of spectacular success stories to share with the world.

We can defeat Boko Haram insurgency and other forms of terrorism if we`re united against it.

It is therefore of uttermost importance that we address all national issues with the principle of unity, commitment, determination and seriousness such as we applied in defeating Ebola, and in no time, we will join the league of great nations and share many more spectacular success story.