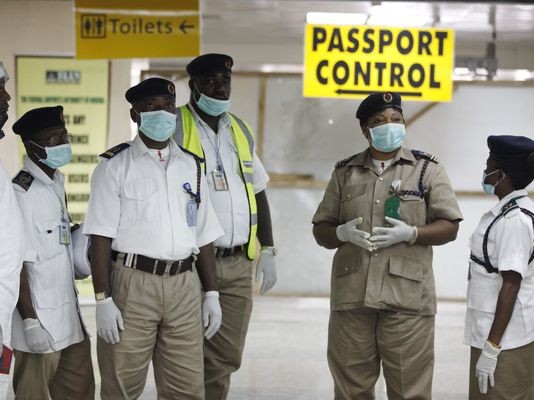 “The point that must be pointedly made is that Nigeria did not cure Ebola. What we all did as stated earlier was to help avoid the spread. Those who caught it died while the few that survived did only by sheer luck. As this writer can testify, some of the so called preventive measures were half-hearted.  In my several trips to many states during the Ebola period, i was only screened at the Lagos and Abuja airports“.

It was all joy last week as the World Health Organization (WHO) certified Nigeria as Ebola free.

The organization arrived at the decision because no new cases were reported in the country since after the outbreak which a Liberian, Patrick Sawyer aided by his country brought on us. Since after the certification, there has been a marked increase in the beating of the chests by our leaders for a job allegedly well done.

What exactly did they do? Did we really cure the disease? If we did, with which drug?  And where was that drug when we were begging the USA for its hoarded experimental cure? It is probably necessary to caution some of our neighbours about following the Nigerian experiment because our effort was not designed to cure but to avoid the spread of the disease.

The other day, the wife of Patrick Sawyer, the Liberian diplomat who will always be remembered as the man who threw us into the quagmire told the international media that her husband went to Nigeria in search of a good health care system. According to her, the Liberian government was nothing to write home about concerning health care.

Unknown to Mrs Sawyer, it is the Nigerian elite particularly the political class that can be said to enjoy good health; the masses do not. Those who wrongly assess Nigeria as Mrs Sawyer has done; need to know that our leaders are regular patients of foreign hospitals; sometimes for check-ups on headache. Our own hospitals do not work. Consequently, no foreigner should come here and compound our dilemma as Patrick Sawyer did.

However, we cannot suggest that no one did well with respect to the outbreak of Ebola because some people did. Even states like Lagos and Rivers did well in mobilizing our people to avoid the disease. Their isolation centres were indeed commendable, so were the medical personnel that managed the centres.

Considerable credit must also go to Professor Onyebuchi Chukwu, our immediate past Minister of Health. Ebola probably brought out the best of Chukwu who took a major leadership initiative to pilot the nation on the subject. He was here and there in all fora and in every media channel communicating effectively as at when necessary.

One institution of society that often does exceedingly, but hardly commended, is the media. At any forum in Nigeria, everyone attacks media practitioners as corrupt “brown envelope” boys.

Even legislators who collect both brown and every other colour of “Ghana must go” also look down on the media. In the case of Ebola however, Nigerian journalists obviously lived up to their social responsibility as every channel devoted ample time and space to public enlightenment on the dreaded disease. Luckily, Professor, Adebayo Adeyemi, Vice Chancellor of Bells University of Technology, Ota, at a briefing on his university’s 6th convocation ceremony last Wednesday gave the media 80% of the credit of the Ebola free certification gotten by Nigeria.

The point that must be pointedly made is that Nigeria did not cure Ebola. What we all did as stated earlier was to help avoid the spread. Those who caught it died while the few that survived did only by sheer luck. As this writer can testify, some of the so called preventive measures were half-hearted.  In my several trips to many states during the Ebola period, i was only screened at the Lagos and Abuja airports.

In Edo State, what i was told at the Benin airport on why there was no screening was “Oga Ebola no de here o”. In Kano, some frequent passengers told me that Ebola screening at the Aminu Kano airport depends on the temperament of the workers on duty.

So is anyone sure Ebola is truly gone for good?  It appears that even the most central Nigerian Medical Association is not sure; hence it has now opened an endowment fund aimed at assisting Nigeria to better prepare should the disease recur. The President of the association Dr Kayode Obembe revealed in Abuja during the association’s physicians week that individual doctors would contribute to the fund.

Why then are our political leaders who are yet to think of funding further research on Ebola busy making claims as to who and who did the so called Ebola magic? How come those who claim curing the incurable Ebola have not cured the curable Boko Haram?

What is crucial now is not any frivolous claim but the realization that many Nigerians who live in places like Liberia will soon come home to spend the festive end of year period with their families. Will there be Ebola screening on them at our porous borders or are we going to rely on the WHO certification and go to bed on Ebola?

With the almighty 2015 election around the corner, will politicians who have been organizing political campaigns in breach of the electoral law do any other thing now that the coast is clear for politics? If so, is Ebola gone forever?

It would be unfair to let Nigerians suffer from the epidemic again only because our entire wealth and attention are put into the political game. It would be wicked to let another brave Dr Ameyo Adadevbo die again. The last time it happened, the nation showed feeble appreciation for the supreme sacrifice paid by that great lady.

During the national honours award for instance, we looked in vain for Adadevbo in the list which should have had her name in the category of Grand Commander of the Order of the Niger, GCON. Instead, the awards were shared to a few achievers while several idlers got because they are privileged to hold certain political offices that are hardly gotten on merit. Indeed, the awards were shared on the basis of quota system.

While some were reserved for legislators who had done more trading than law making, others were allocated to party leaders, governors, ministers and those close to the schedule officers. Ebola cannot go if politics and politicians are the only things that matter to us.

The 7 Pillars Of Connecting With Absolutely Anyone