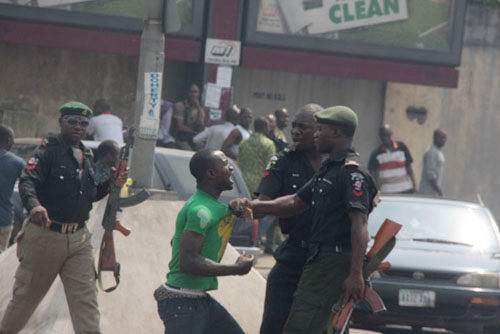 “It is seen from this clear provision that the duties of the police are clearly spelt out, and in maintaining law and order must the fundamental rights of the Nigerian citizens be nipped in the bud by the Nigerian police Force. A situation where a matter occurs and Nigerian citizens inquire into the happenings as an eye witness stating that on no circumstance does a police officer have the right to batter harmless and helpless Nigerian citizen. The question begging for answer is that is there any provision in the police act that empowers the police to harass and maim Nigerians when they prove to know little of their fundamental rights as protected and enshrined by in our constitution“.

Rights are innate in living creatures and to that extent; it is as old as human existence. Rights are also diverse, multi-dimensional and pervasive in nature and are dynamic, in the sense that their frontiers, constantly and ceaselessly evolved.

Human rights on the other hand are the inalienable, inherent, indivisible and inter-dependent rights exceptionally natural and guaranteed by the constitution of Nigeria 1999 as amended 2011. However since the enactment of the Independence Constitution in 1960, fundamental rights provision have become an enduring feature of subsequent constitution ranging from 1979 to 1999 Constitution, in which it is fully entrenched and will continue to enure.

Chapter IV of the 1999 Constitution as amended deals with fundamental human rights, which are essentially civil and political rights. Chapter IV is motley of rights, ranging from right to life, human dignity, personal liberty, fair hearing, freedom of expression and the press, among others.

Besides providing for these rights, the 1999 Constitution like the others before it, has also provided for the appropriate machinery for the realization and enforcement of these rights, even when perceived to be contravened or about to be contravened. Commenting on the nature of human rights, Eso, J.S.C. (late) inRansom Kuti v Attorney General of the federation observed inter alia that “… it is a right which stands above the ordinary laws of the land and which in fact is antecedent to the political society itself”. It is a primary condition to a civilized existence and what has been entrenched in our grand norm.

Obaseki JSC putting it straight emphasized when he said in Ariori v. Elemo that “the fundamental rights enshrined in our 1963 and 1979 Constitution are… not of reach of the law of waiver. Our oath of office to protect and defend the constitution and the supremacy of the constitution over all other laws enures this …. Right to life, human dignity, liberty, freedom of expression, thought, conscience and religion, right to lawful and peaceful assembly and association which are vital to the human existence and democracy in this nation cannot… be waived”.

This brilliant assertions and submission by these two learned justices of the Supreme Court shows the sacredness and sanctity of the fundamental rights provisions. The constitution also appreciates this and provided that for the fundamental right contained in chapter 1V of the constitution to be altered, it must be passed by four-fifths majority of all the members of each House and also approved by resolution of the state Houses of Assembly of not less than two-thirds majority as opposed to the general alteration provision of two-thirds majority. This section thus emphasizes its sanctity, sacredness and how immutable it can be (see section 9(3) of the 1999 Constitution as amended).

Human rights are inalienable rights recognized by both municipal and international instruments and treaty. Articles 22-27 of the universal declaration of human rights recognizes the sanctity of these rights and also the African Charter on Human and People’s Right, in which Nigeria as a sovereign state is a signatory.

Nigeria is a sovereign state based on her territory, government and the people. Nigeria emanates to be Nigeria independent of all external forces, due to the uprightness of Nigerians who fought tirelessly for her independence. After independence a constitution was made, in which they all agreed to live in unity and harmony as one indivisible and indissoluble sovereign nation.

Under God dedicated to the promotion of inter-African solidarity, world peace, international cooperation and understanding and to provide for a constitution for the purpose of promoting the good government and welfare of all persons in our country on the principle of freedom, equality and justice and for the purpose of consolidating the unity of our people.

From the above assertion and from all indications, Nigerians are peace loving people, even under serious attacks, corruption and injustice being encountered, we are still rated the happiest people in the world. The constitution emphasizes the need for the security and welfare of the people to be the primary purpose of all government, stressing on their active participation in government in accordance with the provision of the constitution and also stressing the fact that sovereignty belongs to the people of Nigeria through whom the government derives their power, through the constitution of Nigeria. This of course is a clear indication that Nigerians wield a lot of power, yet they are peace loving people, despite ill-treatment from people, whom through the constitution derive their power to act from the Nigerian people. The Nigeria Police Force as a case study.

Nigerians are not naïve to act but are law abiding citizens who want to see her country progress amidst all odds. That is the Nigerian spirit. Nigerians are this good spirited, peace loving and law abiding in a continuous manner, even though against their will at times as they experienced ceaseless of intimidation and fear from the Nigerian security agencies especially the Nigerian Police Force.

The Nigerian Police, an establishment of the constitution and provisions of her functions and general duty is being provided for in section 4 of the police Act. The police shall be employed for the prevention of laws and order, the protection of life and property and due enforcement of all laws and regulation with which they are directly charged and shall perform such military duties within and outside Nigeria as may be required of them by or under the authority is or may other Act.

It is seen from this clear provision that the duties of the police are clearly spelt out, and in maintaining law and order must the fundamental rights of the Nigerian citizens be nipped in the bud by the Nigerian police Force. A situation where a matter occurs and Nigerian citizens inquire into the happenings as an eye witness stating that on no circumstance does a police officer have the right to batter harmless and helpless Nigerian citizen. The question begging for answer is that is there any provision in the police act that empowers the police to harass and maim Nigerians when they prove to know little of their fundamental rights as protected and enshrined by in our constitution. The Nigerian Police are intolerant, when asked simple questions on what offence one commits that would warrant handcuffing, detention and being locked up in the cell four hours if lucky and for days, weeks even months, if unlucky without trial or whatsoever.

The Nigerian constitution provides for reasonable time in which someone said to have committed an offence could be charged to court and such persons have rights to remain silent, right to legal representation of his/her choice and so many and innocent until proven guilty by a competent court of jurisdiction. The Nigerian citizens rights range for pre-trial right, trial rights and post trial rights and also when unlawfully detained entitled to public apology and compensation. But it appears that the Nigerian Police are too egoistic to hear Nigerians tell them what they know not about their duties and the rights of the Nigerian citizens. It is hoped that the policemen will swallow their priced and see beyond the uniform they wear and the arms they carry, as they are Nigerian and empowered by Nigerians.

In conclusion, it is hoped that Nigerians will be given the opportunity to arrange their affairs within the spheres allotted to them by law, in such a clement environment, devoid of molestation, intimidation or harassment from government or the agencies as witnessed by Nigerians on daily basis. It is hoped that human rights are more recognized and tutored to the Nigerian police and Nigerians on their rights to avoid conflicts and negligence on the side of the ‘security agencies’. Nigerians though angry and aggravated by the continuous show of personal aggrandizement by the Nigerian Police, but are still somewhat mute and peaceful in other to see her country strive economically, socially and be among the comity of nations. Yet the Nigerian Police must be trained and cautioned against unnecessary harassment and intimidation of Nigerian citizen while on uniforms and while carrying their guns. In civilized nations, police respect the rights of citizen because the consequences are known and on no circumstance would a citizen be assaulted, battered by a law enforcement agent.

It should be emphasized that it is only when the elaborate socio-economic structure envisaged in the fundamental objectives and directives principles of state policy has been brought to life that the fundamental human rights guaranteed in the Nigerian constitution can be realized. It is however hoped that one day we all will stand up to our rights collectively and demand for it, for it is truly ours, as we have been deprived of it for so long and it need to be retrieved.

Thus, the fundamental rights of Nigerians is non-negotiable, Nigerian Police must learn and adapt to respect it and on no circumstance should it be tampered with, unless according to the law and directive of a competent court of jurisdiction after satisfying the principle of natural justice and in line with the provision of the Nigerian Constitution.

Mubarak Tijani writes in from Lagos

How to Spend the First 10 Minutes of Your Day

8 Tips For An Amazing Mentor Relationship