If Youths can vote at 18, we can also be voted for at 18 – Here’s all you missed from the RISE Networks’ UN International Youth Day 2015 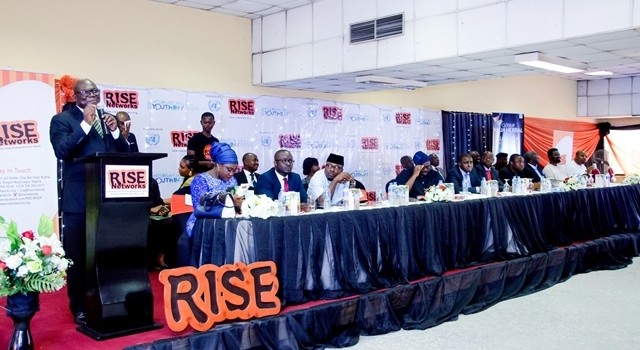 As far as Youth Programs go in Nigeria, it rarely gets better than a Rise Networks’ event. Weeks and weeks of planning and on ground publicity leads to the massive crowds that attend their programmes in every state they go to. The UN International Youth Day 2015 commemoration was not an exception as before the event started thousands of students and young activists and professionals had filled the hall while others were just at the outside on the red carpet or visiting the stands of various corporate sponsors like First Bank and Close-Up. In line with Rise networks’ focus on Youth and Education Development via Capacity Building on Youth Inclusion, this year’s programme was to be the first big youth gathering after the 2015 elections that had brought on a change of government.

Timi Dakolo opened the event with a rendition of the national anthem while the UNILAG SUG President, Comrade Martins Abiodun followed up with the second stanza of the national anthem which is more like a prayer for the youth. Following swiftly was a fiery debate between Miss. Rinsola Abiola, a young member of the APC board of trustees & Anthony Ehilebo from a PDP affiliated Youth Group (Rethink Nigeria). The debate was moderated by this writer (Ademola Olarewaju) and one could feel from the high interest in the debate that the last elections have surely increased the political consciousness of usually non-partisan youths. For many, the two session debate was the highlight of the event – an exuberant APC advocate Rinsola versus a PDP defender Anthony who struggled to sustain interest in his party even as more people hailed the APC representative’s arguments than his. Rinsola proposed and most speakers after agreed that the “If we can vote at 18, we can also be voted for at 18”.

With a formidable line-up of speakers that included the Senate President Dr. Bukola Saraki who had to jet out last minute to represent Nigeria at the Inter-Parliamentary Union in New York, he was represented by his Deputy Chief of Staff in the person of Hon. Gbenga Makanjuola, the former lagos Governor Fashola, senior spokesman to the former President Dr. Reuben Abati, Ovation publisher Dele Momodu among others, the crowd was ready to be charged.

Dele Momodu opened with stressing the importance of political participation, explaining how he had in times past supported others into office until he decided to throw his hat into the ring and contest for the position of President. He insisted “the youths of today must go back to the days when young people had a strong voice” and emphasised that social media would be the force that would make youths in Nigeria a potent force in the polity henceforth.

Senate President Saraki emphasised the importance of getting involved, saying “take part to take charge”. More importantly, he mentioned that the 8th Senate is going to come up with E-Parliament, a system where online voices can contribute to senate debates, make their voices known by engaging with senators and monitor events at the upper chamber of the National Assembly.

Dr. Abati spoke on the need for youths to develop a sense of identity – to mark themselves out from previous generations in rigorous thinking, distinctive engagement and an insistence on doing the right thing. He traced the role of youths in various change of governments across the world via ‘Arab Springs’ and also likened it to #OccupyNigeria but pointed out that the latter had a political undertone. He cited this as example of how governments that ignore the youths usually get swept off.

Man of the moment, Ex Gov Fashola took the crowd on a practical journey in political rising by explaining that even though he feels young at heart and still plays football, he is by no standard a youth and has no right to claim being a youth. He aligned with Rinsola Abiola’s position that the minimum age at which people can contest for public office should be constitutionally reviewed then explained that when youths leave a vacuum in the political process, people who are above 50 move into such positions at the expense of youths.

Award-winning journalist Tolu Ogunlesi took charge of the panel session where another invited guest Moses Siasia, a young contestant for the office of Governor of Bayelsa declared that Job Creation and Education were two key parts of his plan for youths in Bayelsa. The role of social media was discussed more in-depth as Abati explained that sometimes the abusive language employed by some made social media a tedious ground while Dele Momodu also toed the same line that social media had more positives for youths than negatives.

The event ended on a high note with all the attendees who came having picked up a thing or two. Rise Networks has shown again why they remain the foremost youth platform for empowerment and engagement for Young People across Nigeria as testified to from interactions with many of the Participants. The political space clearly has a space for youths but more youths need to get involved and with the response from the crowd at the event, future politics will be shaped by youths henceforth.

Enter for the World Innovation Summit for Education (WISE) Awards 2016