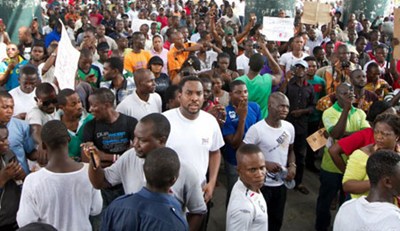 “Creating new jobs should not be the only concern of the government job strategy. There is also the necessity of not only protecting the existing jobs, but more importantly ensuring that those working are able to retain the jobs by providing them with right training, right skills and right education. The building blocks of any skills strategy must be solid foundation skills and stronger links between the education and the world of work. International experiences show that countries that have succeeded in linking skills development to higher productivity, employment and development have targeted skills development policy towards the key objectives of matching supply to current demand for skills, building and sustaining competences for future labour market needs, as well as helping workers and enterprises adjust to change“.

RECOGNISED as the most active segment of the population, the youths are also, literarily speaking the oil that lubricates the engine of economic growth, and the powerhouse that energise the pace of productivity. As workers, and through their direct involvement in production and service offerings, they help to create conditions for continuing workplace productivity, and also effect actual productivity increases through introduction of innovations, better work methods, and also the deployment of higher human intellectual faculty.  In advanced countries of the world, their celebrated economic growth had largely been credited to the economically-active youths.

In Nigeria, unfortunately, youths (defined as individuals between ages 18 – 35 years), are yet to live up to their celebrated billings. Indeed, given the overwhelming challenges they face, it is not entirely hyperbolic to describe them as being seriously at risk, vulnerable and socially disadvantaged.

Among those privileged to work, what they call “work” hardly merits the descriptions. Many are exposed to indecent work conditions, dominated by long, laborious hours and earning low wages. The bad situation is compounded by the menace of child labour, and casualisation.  The situation is particularly worse in the largely unregulated informal sector, a sector notorious for all manners of work indecency (poor work condition, low incomes, lack of social protection etc).  The womenfolk, even though a large proportion of the working population, faces social, cultural and even gender discrimination, with large chunk of their work going unreported, or, as in the case of full-time housewives, unrewarded; for those looking for jobs, their prospects of getting one is no less gloomy. Many are seriously lacking in employable and transferability skills so crucial for success in 21st century world of work. Many analysts contend that the latter problem is a direct fall-out of poor quality standard of Nigeria’s educational system – a system notorious for churning out half-baked graduates.

Taken in totality, it is hardly surprising that Nigeria’s overall economic performance is unimpressive, to say the least. At $2,100, our labour productivity (per value added) is below even poorer countries of Cameroun, and Cape Verde, according to recently released “Nigeria: An Assessment of the Investment Climate”. That Nigeria’s economic now ranked number one (thanks to recent GDP rebase) is, to the informed, hardly cheering news. If anything is cheering at all, it is the long overdue recognition of the Nigerian service sectors (notably, telecoms and film industries, “Nollywood”) as key contributors to GDP – never mind if some, far-sighted watchers had long recognised this. Beyond the hullabaloo that trailed our so-called Africa’s number one economy is the hidden harsh reality: Our so-called new found- economic power is largely factor-driven (capital accumulation fuelled by oil) and NOT due to higher productive performance.

In short, and contrary to standard neoclassical theory (“a sufficiently high growth rate automatically reduces poverty and unemployment), Nigeria’s high output growth has not led to employment growth. This of course has given rise to concern that Nigeria is actually experiencing “jobless growth”, which translates to employment growth lagging substantially behind output growth. The consequence, of course is high unemployment. There are other no less worrying consequences of poverty, which with 68.0 per cent of Nigerians living below $1.25 daily remains below the human development threshold.   Furthermore, on the human development index, Nigeria was ranked among countries with low development index at 153 out of 186 countries that were ranked.

The productivity costs of such mindless waste is mind-boggling, to put it mildly. Among others, poverty, youth unemployment, poor quality products and services, and low productivity. Add all these to the brain drain that has resulted in massive numbers of Nigerians taking risky exit (many are crammed in rickety illegal boats which often capsize, leaving the vast Mediterranean, polluted with wasted youthful blood

How then can we tackle the challenges?

To be sure, the youth job challenge facing us is multi-faceted, ranging from creating jobs for those who want to work, to improving aspects of the work people are engaged in, do, as well as making the youths more productive. Tackling the problems therefore requires specific measures aimed at these issues. A key lesson that emerged from Nigeria’s “jobless growth” dilemma is that economic growth alone does not automatically translate into human development progress, or generate more jobs. The government should therefore adopt a broad-based job strategy that is firmly rooted in reconciling the mismatch between high economic growth and the inability of individuals – especially youth – to find adequate employment. Economic growth, living standards and employment growth can indeed move together, and they often do – as in the remarkable experience of Korea and East Asian economies. Faced with a disconnect between economic growth and employment, Korea adopted a job strategy, the “National Employment Strategy with a clear target of increase in the employment rate. Government also has a catalyst role to play in job creation through the fostering of an environment conducive to domestic and international business to invest, grow, increase trade and generate job opportunities. Investment Climate reforms helped explain China’s achievement in lifting 400 million people out of poverty, India’s success in doubling its growth and Uganda’s ability to grow eight times the average of other sub-Saharan countries over the last decade. Premised on a strong public-private partnership, such an enabler must also be strong enough to attract Nigerians in Diasporas to return home and invest.

Also at the heart of any meaningful job creation strategy should be the diversification of the largely monolithic base of the Nigerian economy. Country experiences have shown that a high rate of growth of manufacturing in relation to overall GDP growth is potentially conducive to a high rate of employment growth. It also has the added benefit of creating conditions for transfer of surplus labour from sectors characterised by low labour productivity to those with higher productivity. Some countries of East and South East Asia (ESEA), especially, Korea, Malaysia, Indonesia and Thailand, were able to achieve this kind of manufacturing-intensive and employment- growth pattern.

Creating new jobs should not be the only concern of the government job strategy. There is also the necessity of not only protecting the existing jobs, but more importantly ensuring that those working are able to retain the jobs by providing them with right training, right skills and right education. The building blocks of any skills strategy must be solid foundation skills and stronger links between the education and the world of work. International experiences show that countries that have succeeded in linking skills development to higher productivity, employment and development have targeted skills development policy towards the key objectives of matching supply to current demand for skills, building and sustaining competences for future labour market needs, as well as helping workers and enterprises adjust to change. The use of school-based structures for impacting workplace skills has developed in the last 15 years and many countries have now adopted a system whereby skills training occur in tandem with the regular school curricula. A good example is the German Apprenticeship System which has been very successful in facilitating the transition from school to work. Indeed, the fact that German’s youth unemployment has consistently fallen below adult unemployment rates is a testimony to how successful this innovative school-linked skills development programme had been.

Education and technology as antidote to poverty, underdevelopment in Nigeria

With Just $15, This Lens Turns Smartphone Cameras Into MICROSCOPES!

Death To The Resume? How To Go Paperless And Score Jobs Socially