Lacking In Front, Lagging Behind; The Burden Of An Unscrupulous Treasury Looting Ruling Elite 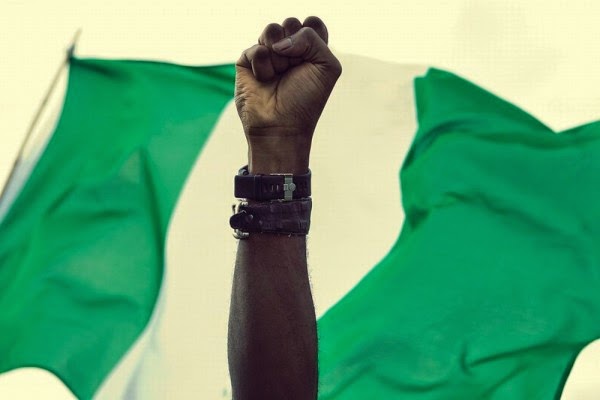 “The end result of these greed compounded ineptitude of the thieving ruling class has been the current extremely high levels of insecurity and violent crime across the country. So much so that according the latest report on The situation of internal displacement and the condition of the internally displaced worldwide; Nigeria now has an internally displaced population of 3.3 Million People.“

Why do some nations lag behind other nations? Why inspite of the immense human and natural resource potential does our country Nigeria, continue to lag behind? Why have we not fulfilled the promise of independence? Why are we nowhere near realising even half of the potential of this tremendously endowed Nation?

What manner of administratively inept and congenitally light fingered ruling class have we been saddled with as a people?

Let us take some examples; In the early 1960s, in the immediate aftermath of ‘flag independence’, Nigeria established, about the same time as Brazil, a Defense Industrial Corporation, now more than 50 years on, the Brazilian Corporation now manufactures Military tanks, aircrafts and other military hardware! And the Nigerian counterpart? The Kaduna based DIC is famous [or perhaps notorious] only for the fact that it is now a manufacturer of furniture!

Again from about the same period, Malaysia came to Nigeria, the world’s then leading producer and exporter of palm produce, to gain insight into this success story, and take palm seedlings to replicate the Nigerian success in Malaysia. Fast forward to the 21st century; Malaysia is now not only the world’s leading producer of palm produce, but a major player in the global market for products derived from palm oil, and palm kernel, including biodiesel. In Nigeria on the other hand, not only do we import palm oil, we also depend more than 80% on imported refined fuel, even though we are one of the top 7 largest producers of crude oil.

Let us look at power generation; The mainstay of any modern economy. By the beginning of the 4th Republic in 1999, the country was generating less than 3,000MW of electricity; and going by the projections of the vision 2020:20, Nigeria needs to be generating, distributing and transmitting not less than 35,000MW by the year 2020 in order to become one of the 20 largest economies in the world.

Several questions should of necessity agitate our minds from this unimaginable scenario. What is responsible for the huge discrepancies between installed generation capacity [at more than 9,000MW], the available generation capacity [at 6,000MW], and the peak (actual) generation capacity [at just below 4,000MW]? How can we be comfortable with losing nearly 4,000MW between installed and available generation capacity; and losing a further 2,000MW between available, and actual peak generation capacity? To compound an already disgustingly bad situation, why do we always witness system failures, including total system failures whenever we are close to generating and distributing 4,000MW of electricity, even though the installed transmission capacity is 6,870MWs? What manner of ruling elite worth its economic, much less its political salt can live comfortably with such gross inefficiency? How come after spending [some will say wasting] nearly $50bn on transforming the sector, the sector stills require more than $35bn worth of new investment after privatization to minimally improve generation, distribution, and transmission of electricity for a mere 10,000MW peak generation? And more significantly, why inspite of this odious testimony to filth, have no heads rolled? Why haven’t there been investigations, arrests, prosecutions, sackings/dismissals, and judicial punishments meted out to convicted culprits?

Let us move on to other areas. How can any right thinking and or rational human being explain a situation where we are at one and the same time, one of the world’s largest producer and ex[porter of crude oil, as well as being one of its largest importer of refined petroleum products? What manner of gluttonous greed is responsible for this monumental anomaly?

As a result of the grand ineptitude, and crass banditry of our treasury looting ruling elite we have become one of the most unequal countries in the world. The world’s 26th largest economy, Africa’s largest economy, is also home to the world’s third largest population/concentration of poor peoples. Furthermore, contrary to Section 16 of the 1999 constitution as amended, a mere 10% of the country’s wealthiest citizens own more than 40% of the nation’s wealth, while the bottom 20% own a mere 4% of National wealth.

To make matters worse, The world’s 25th richest man, and Africa’s richest man, as well as Africa’s richest woman and the richest black woman are both Nigerians, in a country with 112 Million people [705 of its population] living in poverty; in a country with nearly 30% general unemployment, and where 54% [NBS – 2012]/80% [CBN – 2014] of youths between 15 and 35 years are unemployed [that is more than half, or just about four-fifth of 70 million youths]! Add to this the fact that Nigeria, according to official figures from the Housing Ministry suffers 18 million housing deficit; that is nearly 90 million people [at the average household size of 5] living in subhuman conditions or homeless, again contrary to Section 16, Chapter 2 of the 1999 constitution amended.

The end result of these greed compounded ineptitude of the thieving ruling class has been the current extremely high levels of insecurity and violent crime across the country. So much so that according the latest report on The situation of internal displacement and the condition of the internally displaced worldwide; Nigeria now has an internally displaced population of 3.3 Million People.

So this is the very grim picture of our brutish existence 54 years after independence, a collectively damning scorecard of our pillaging and light fingered ruling class after 100 years of amalgamation, and on the eve of another general election!

We can draw only one rational, logical and humane conclusion from this nightmarish scenario; this ruling class has not only collectively failed us, it is also historically incapable of leading us out of the doldrums, and away from the edge of darkness towards which it has inexorably led us.

This is why we must make the upcoming elections all through 2014 and 2015 issue based elections. This is why we must aggressively interrogate not only the candidates, but also their parties; and more significantly, this is why we must in taking our destiny into our own hands, create, establish, and nurture our own independent political platform, which alone can enable us make the historically necessary transition from ‘Protest To Power’.

Two Lists You Should Look At Every Morning

6 Reasons To Step Outside Your Comfort Zone

Did You Know? Your Spouse’s Personality Affects Your Career