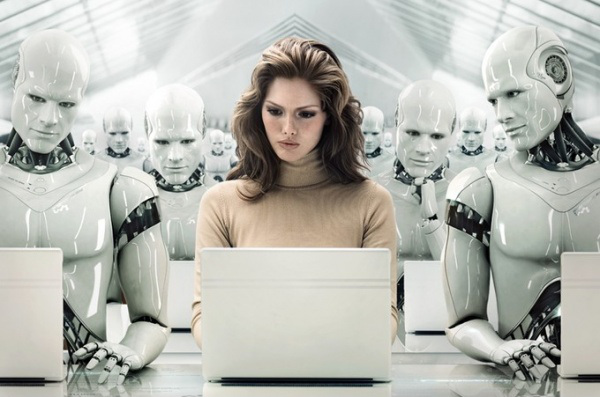 “We overestimate technology in the short term, and we underestimate it in the long term.” This sentiment has been borne out repeatedly over time. Despite the incredible advances in artificial intelligence, mechatronics, and human-machine interaction made over the past several decades, as a society we tend to overestimate what robots are capable of today. The simple act of tying one’s shoes can be taught to a 5-year-old in minutes, but the combination of cognitive and physical interpretations that need to happen to make this task second nature to the child are incredibly difficult to replicate inside the control system of a robot.“

Ever since the earliest concepts of humanoid robots were introduced into popular culture, the idea of robots replacing people in various capacities has never been far behind. Science fiction movies tend to portray the dark side of this imaginary equation, with robots eventually becoming smarter than their human makers and deciding to eliminate them in some grand fashion. While this concept has sold a lot of movie tickets, the reality is a lot less sinister. The same holds true for the debate surrounding robots taking jobs.

Arthur C. Clarke, a famous science fiction writer from the 1950s, is reported to have said, “We overestimate technology in the short term, and we underestimate it in the long term.” This sentiment has been borne out repeatedly over time. Despite the incredible advances in artificial intelligence, mechatronics, and human-machine interaction made over the past several decades, as a society we tend to overestimate what robots are capable of today. The simple act of tying one’s shoes can be taught to a 5-year-old in minutes, but the combination of cognitive and physical interpretations that need to happen to make this task second nature to the child are incredibly difficult to replicate inside the control system of a robot.

So while it’s possible today to program a traditional SCARA industrial robot to perform a physical task in a way that is superior to a human doing it (for example, moving an object faster and in a blink placing it more precisely than a person can), the downsides of this approach the high cost and technical difficulty preclude it from being used universally throughout a facility to “replace all the people.” There are simply too many parts of the process (whether that process is in a manufacturing plant or in the checkout line of the local fast food restaurant) that require a human’s dexterity, reasoning, and intuition to effectively replace an entire workforce with machines today.

That said, it is becoming increasingly feasible and cost-effective today for robots to assume many of the repetitive, labor-intensive tasks that are part of many people’s jobs. “Smart” robots that can work safely next to people, are aware of their environment, and are able to modify their behavior according to those circumstances are fortunately becoming more and more commonplace. And yes, I do mean fortunately, because it is often these tasks that define the least meaningful and rewarding aspects of a person’s job.

For example, TUG robots from a company called Aethon in Pittsburgh are in hundreds of hospitals across the U.S., taking dirty dishes and sheets from patients, and allowing the nurses and aides who did that previously to spend more quality time with their patients doing what they do best – administering care. The PackBot from iRobot largely took over the life-threatening task of investigating roadside bombs in places like Iraq and Afghanistan, saving the lives of many soldiers in the process. And my current company’s robot Baxter is now performing many of the simple, repetitive packaging and material handling tasks that used to take up the time and effort of factory workers in the many facilities who have adopted this technology over the past year. As a result, those same people are being redeployed to other tasks within the plant, in some cases with a promotion and a new job description to show for it.

In each of these cases, the robot has effectively assumed the responsibility for the dull, dirty or dangerous task – but has not replaced the human responsible for getting that job done. The robot in this equation is a tool – not at all unlike what a PC is for an office worker, a tractor is for a farmer, or a nail gun is to a home builder. All of those technologies were once speculated to be replacing or at least reducing the need for the humans that wielded them. Yet all of those professions still exist today, and the workers in those fields are better, happier, and more productive because of them.

Which brings me back to part two of Mr. Clarke’s assessment, that we underestimate the value of technology in the long term. I believe we do this today as well, and it concerns me that we as a society are not producing robots and other technologies quickly enough to ramp up to the expanded needs we will soon have for them.

Over the next 40 years, we are going to see a dramatic drop in the percentage of working-age adults across the world. And as baby boomers reach retirement age, the percentage of folks in retirement is going to change dramatically in the opposite direction. That means there will be more people with fewer social security dollars competing for services, and fewer working people available to deliver those services to them.

We will need robots to help us deal with this reality, doing the things we normally do for ourselves but that get harder to do as we get older.  Things like getting groceries, driving cars to visit people, and helping us move around more safely and efficiently as physical ailments settle in.

Before you dismiss this vision for a highly automated society, think about it the next time you put a load of laundry into your washing machine or hit the start button on the dishwasher as you head off to bed. These are tools that have automated unpleasant and time-consuming aspects of our lives, and given us more free time to pursue more productive or pleasurable activities.

A generation ago, these machines were looked at with skepticism and sometimes ridicule. Today, they are staples of modern life that most of us would be hard-pressed to live without.  I hope and fully believe we will be saying the same thing about robots a generation from now.

Is Apple Working On A ‘Phablet’?

Enter for the Web 2.0 and Social Media Learning Opportunity for Africans