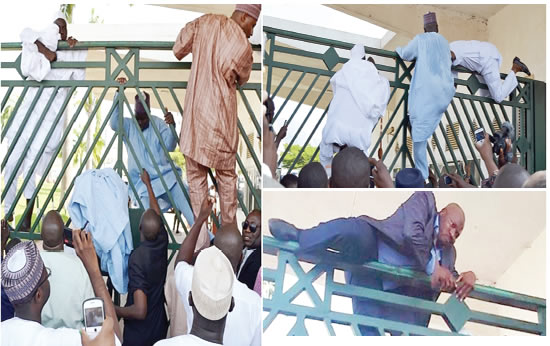 “The IGP’s overt partisanship, however, only goes to prove that nothing is ever quite normal in Nigeria for in saner climes, such a man would not occupy such a sensitive and crucial office. In this period of widespread insecurity and a raging insurgency, the IGP would be better suited to tackling those issues than desecrating the Nigerian constitution and harassing duly elected officials“.

Recently, the National Assembly was the subject of renewed media interest. Something happened which had previously never been experienced; revered members of the House of Representatives – ‘Honourables’, as we call them – were shown live on television climbing the National Assembly gate in order to gain entry to the premises. The man at the centre of it all was Hon. Aminu Tambuwal, the Speaker of the Federal House of Representatives and number four citizen of the country. He had no recourse but to join others like Femi Gbajabiamila in going over the gate after he was denied entry by officers of the Nigerian Police despite introducing himself to them. The incidence birthed the iconic image of him jumping over the gate in his white babban riga.

The reason for the melee was none other than Tambuwal’s decision to defect to the opposition party, the APC. As expected, the PDP – and indeed the Presidency – did not receive the news of his defection in good faith, and what followed was a line of action so vile and reeking with such disrespect for the rule of law, that Nigerians were left shocked as they watched the spectacle unfold on TV and tried to understand what exactly was going on.

The Inspector General of Police – aptly re-christened the ‘Inspector General of the President’ by Professor Farook Kperogi – assumed the duties of a judge and ‘interpreted’ the constitution, thereby arriving at the decision to withdraw Tambuwal’s security aides. This colossal mistake preceded the unfortunate incident at the National Assembly. Perhaps, something needs to be said for the IGP’s energy; it is so much that he is willing to take on duties that aren’t his.

The IGP’s overt partisanship, however, only goes to prove that nothing is ever quite normal in Nigeria for in saner climes, such a man would not occupy such a sensitive and crucial office. In this period of widespread insecurity and a raging insurgency, the IGP would be better suited to tackling those issues than desecrating the Nigerian constitution and harassing duly elected officials.

What prompted the decision to jump over the gate was a similar occurrence in Fayose’s Ekiti State; the fear was that PDP lawmakers being allowed in while others were prevented from gaining entry might very well have resulted in the Speaker’s ‘impeachment’. Another cause for concern was that the state of emergency in three North-Eastern states might have been extended without due deliberation.

In a bid to quell the chaos which had resulted from the gate-climbing fiasco, Senate President David Mark made his way into the Green Chamber to make peace and restore tranquillity. In return, he was welcome with a slap by an enraged Abdulmalik Cheche, a PDP legislator from Niger State.

The legislators, furious at the Presidency for the affront against them, decided to vent their anger by sponsoring a motion for impeachment; a cry which has now gained momentum and currently resounds in the Red Chamber. This development – although welcome – is, in itself, a cause for concern.

Nigerians have been bearing the brunt of unfavourable environmental conditions since the inception of this tenure; unemployment, poverty and wanton killings have been the order of the day. These issues, among others such as mismanagement of funds and the missing $20bn were not enough to spur the ‘honourable’ legislators into action but all of a sudden, legislators were attacked directly and they became alive to their duties and sought to vent their anger by doing what should have been done long ago. The abduction of 276 girls from Chibok and the alarming number of Nigerian refugees in neighbouring countries and millions of internally displaced persons were not enough to jolt their memories, but a brief taste of what average Nigerians go through during protests angered them so much that they felt a need to teach the President a lesson. This, therefore, shows that the impeachment has nothing to do with the people or what favours them, and everything to do with a bunch of privileged legislators being angry with their boss – the President.

For many senators, especially those in the PDP, their dissatisfaction is no doubt prompted by the fact that automatic return tickets seem to no longer be forthcoming. Hence, the threat of impeachment would do a good job in reminding the president and the leadership of the PDP that they need to be pacified with automatic tickets and perhaps, even some treasure-filled ‘Ghana must go’ bags.

It would most definitely be a welcome development for the president to be impeached but the fact that all impeachable offences were overlooked until now is shameful indeed. The legislators have shown, by this singular action, that they neither care about the wishes of their constituents nor the safety of Nigerians.

Better late than never, however, but it is essential that we take several key lessons away from this; the most essential of which is the need to vote representatives who are truly concerned about the masses and not just out to guard their selfish interests.

4 Ways To Tell If Your Product Is Truly Disruptive

A Case of Graduates Who Can’t Write Application

What Are Your Leadership Strengths?