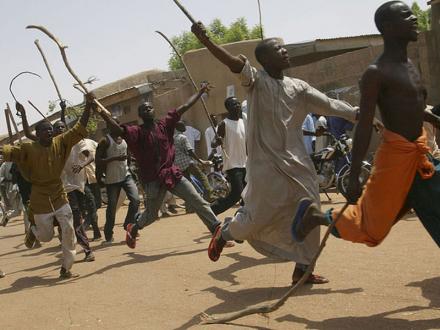 “It is disheartening to see politicians in office since 1999 with zero contribution to national development still planning to contest for elections in 2015. That is why it is very crucial for the electorate and Nigerians to seriously have a re-think as to the caliber of people they cast their votes for in the next general election“.

The political drama has gradually started unfolding in Nigeria. Almost all the governors who have served for eight years are jostling to contest for election to the senate in 2015. They have started scheming criminally and deviously on how best to outwit their people and themselves into securing power at all cost especially to the detriment of their people. Some shameless political office holders even go to the ludicrous extent to claim a bunch of fictitious youths and others with multiple personality disorder have pleaded with them to continue in office till thy kingdom come. Even those that selfishly arrogated millions of dollars to themselves as pension and retirement packages are not yet retiring, they all want to be senators so that they can still dubiously prescribe more pension packages for themselves. Where is the hope for the youth?

It is share selfishness and possible personal enrichment that is making all these non-performing governors to still want to contest and become senators. Not that in their eight years they achieved feats that is groundbraking nor that they intend to serve the interest of the people, no, not at all. Some will argue that these politicians intend to remain politically relevant that’s why they want to contest, alas, it’s the same old selfish, self centered retrogressive force that is behind all of them and that’s the fact.

This scenery of merry-go-round of politicians in the senate contesting for governors; ministers contesting for governors and so on has been the trademark of politics in Nigeria in the past 10 years or thereabout. It is a sit-on or sit-tight syndrome that does not give room for freshness or injection of young vibrant and intelligent politicians who have the capacity to implement developmental changes in the Nigerian polity. Not that these worn out politicians do not possess the constitional right to contest for positions, they do. The issue is that lots of them have failed woefully as governors and heads of ministries. As a matter of responsibility if they heve sincerity of purpose they ought to step down and give room to more credible individuals to contest in positions so that the nation can move beyond the retrogressive state they have placed it, but because they have amassed questionable fortunes, they result to contest and occupy other positions where they would make little or no impact as evident in former governors in the national assembly who are not even motion movers, just the “ I concur” senators. Even the senators who are governors are not issue oriented but play politics with everything in terms of state development.

It is disheartening to see politicians in office since 1999 with zero contribution to national development still planning to contest for elections in 2015. That is why it is very crucial for the electorate and Nigerians to seriously have a re-think as to the caliber of people they cast their votes for in the next general election

Let us imagining these scenarios: We have had people who have been in power since 1999. People who have occupied various positions for the past ten or more years. Governors, Senate presidents, Speakers, House of Assembly members, House of Representative members, Senators, Ministers and so on. Take a sample and study these individuals, one will notice that 95% of these peoples still want to contest for election in 2015. Now imagine all the stupendous salaries all these people have been collecting in all the positions they have been occupying, from president downward, then compare it in relation to the service they have rendered for Nigeria: total paradox. Instead these politicians have become multibillionaires in dollars and Nigeria in turn has been grossly pauperized. But imagine the situation critically.

Then another scenario, in spite of all the very expensive, dubious salaries and allowances of various forms all these political office holders have been receiving, some since 1999 till date, how many of them have come forward to say they will not receive their salaries and other allowances but will work selflessly for Nigeria? Serious issue. How many? It is on record that Governor Rauf Aregbesola of Osun state is the only governor who is not receiving salaries and has converted his security votes into salaries for some employed citizens of Osun state. Maybe one or two other office holders are not on salaries, but 99% of the other political office holders don’t care about selflesss service, those among them who dont loot from Nigeria receive salaries far more than the President of America recieves. Even some ministers in Nigeria earn more than all the heads/presidents of all the European contries. Once again where is the hope for the youths and Nigeria?

It is a fact that the selfishness of these politicians have redefined governance as a big bowl of heist, banditry, stealing/corruption and as such the principles of good governance is a mere mirage. As we see today in Nigeria, some governors, ex-governors, ministers, senators are richer than their states and constituencies; yet they want to still contest elections in 2015, are we practicing kleptocacy?

Let us see politicians who will come and say they will not receive their salaries and allowances, but will work for their states and regions. Note that salaries and allowances are the rights of office holders but until we begin to do things differently, the country shall continue to retrogress. Not the charade and melodrama these politicians are playing, scripting to the public that youths and communities are urging them to contest and recontest for positions they have been occupying since 1999. The dramas are so badly scripted that even kindergarten children know that these politicians are crooks and it’s not their constituencies that purchase the forms nor urge them to contest, its all selfish desires.

2015 is around the corner and as things are now it is imperative that captains of industries, brilliant youths, people of sound integrity should participate in the elections for Nigeria to experience a new breed of leaders that will deliver her from the claws of the hawks who call themselves ex-this and ex-that.

10 Smart Moves Every Twentysomething Should Make

Is “Do What You Know” Smart Advice for Startup Entrepreneurs?