Reign of fiscal anarchy in Nigeria 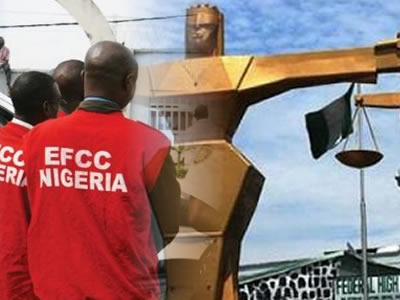 “Fifty three years down the line, Nigerians are still begging for constant power supply, good roads, good leadership, good health system, employment, sound education, alleviation of abject hunger etc. However, it is constant denial of these without which no nation can make meaningful progress that they get in return. Most of our leaders enjoyed free and good education with tens of jobs available to choose awaiting them upon graduation from school, but the present is far from what it used to be. Nothing else is responsible for the suffering reserved for our present generation other than corruption fueled by impunity, total fiscal anarchy and lack of concern for the masses.“

A SOCIETY left without a law is much better than a society with laws that are dead owing to non-implementation of the said laws. This is a clear picture of the Nigerian society where policies, Acts and laws do exist on papers without taking hold on those who are placed in leadership for justice and even punishment when broken. Anarchy refers to a society without a publicly enforced government or violently enforced political authority. This definition of anarchy does not connote the absence of law but the presence of law without enforcement. Therefore,  fiscal anarchy does exist when specific fiscal legislation made to guide the operation of the economy are obeyed in breach or most times not obeyed at all without any sort of punishment on the perpetrators.

Governance ensures government’s ability to make and enforce rules, and to deliver services, use of state resources to improve the lots of her citizens. Fiscal governance, therefore, focuses on how governmental budgetary policy is planned, approved, carried out and monitored. Generally, it involves more than public entities, that is, it is tri-sectoral, with business and civil society engaged as well. Without good governance, there can be no accountability. Good governance plays a critical role in ensuring collaborative, peaceful, coexistence and progressive process of democratic culture and socialisation. It also attracts investment to a country, improving productivity and competitiveness, promoting political stability and enhances rapid socio-economic development. This will in turn increase the standard of living of the people, make available potable drinking water, good road network, sound educational system, well equipped hospitals, reduced infant and maternity death, reduced unemployment rate and create an enabling environment for business to drive. But the reign of fiscal anarchy will not allow Nigerians to enjoy the dividends of sound fiscal governance.

A cursory observation into Nigeria reveals that corruption is perpetrated with impunity with little or no effort at bringing the perpetrators to justice. Since the return of the country to civil rule in May 29, 1999, the Nigerian government has taken a number of measures to address the problems of corruption and bad governance in the land. These measures include public service reform (monetisation to reduce waste and reduction of over-bloated personnel, reform of public procurement, Fiscal Responsibility Act); establishment of anti-corruption enforcement agencies (such as the Economic and Financial Crimes Commission, Independent Corruption and other Practices Commission); sanitisation of the financial services sector by the Central Bank under Governor Sanusi, which revealed mind boggling levels of bare-faced theft by the management of several banks in Nigeria. Despite the establishment of all the anti-graft commissions by the various administrations, corruption has continued to escalate like wildfire.

Laws become an instrument of control for all citizens when there are clear and specific evidence of those which it has punished. In Nigeria of today, this is only obtainable when the breaker of the law is a common man. Cases abound of our leaders who abuse office for private gains and pillaging public resources entrusted with them without any punishment. Therefore, it will not be out of place to bring up catalogues of fiscal anarchy which have drawn back the wheel of progress of Nigeria.

The national budget which is a quantitative expression of government’s financial plans for a fiscal year with a focus to systematically induce socio-economic development over a period has a process through which it comes onboard. The budgetary process include the preparation of the Medium-Term Revenue Framework – which defines the funding sources; Medium-Term Expenditure / Fiscal  Framework – which defines spending priorities and fiscal balance; Sector Strategies – which identifies and prioritises projects/programmes critical to achieving sectoral targets; the formal MTEF/Fiscal Strategy Paper which articulates and seeks National Assembly’s approval  in order to commence budget preparation; formal presentation of the budget to the NASS; consideration and passage by NASS; assent by the President and monitoring and evaluation of budget implementation. But never in the history of Nigeria since the existence of the Fiscal Responsibility Act 2007 has this been obeyed. That Act, by Section 14, demands that the Minister of Finance should prepare and present the MTEF before the end of the second quarter of each financial year to the Federal Executive Council for consideration and endorsement. Also, Section 13 (2) of the FRA demands for public consultation during the MTEF preparation to allow for popular participation. There is a law but we live and act as if there is none since no one is punished for the breach of it.

Late presentation and passage of budget is another act of fiscal anarchy that has failed to stop since our return to democratic rule. Second quarter down the line, the battle for the 2014 national budget has not quite settled, although the President is reported to have signed it, obviously reluctantly. The President is busy flying up and down conducting rallies and campaigning for 2014.  Is this not a clear evidence of fiscal anarchy? The injunctions of the FRA 2007 have completely been kept aside and our leaders are playing games with the economy of the nation.

The late presentation and passage of the budget also fuel MDAs inability to implement full budget at the end of the year. Also, when budgetary resources are available and the authorities decide to sit on the funds, refusing to release them, leading to poor capital budget implementation, it is clearly an act of impunity and the reign of fiscal anarchy. The legal and legitimate expectation is that budget should be implemented to the latter barring any unforeseen circumstances, which should be communicated to the legislature by the executive. Some MDAs lack the capacity to execute budgeted project while some will refuse to implement on time till ending of the year in order for them to take advantage of special and restricted tendering as against open competitive bidding. This wicked act has resulted in a waste of resources, looting, arbitrary insertion of projects into the budget, abandonment of projects worth over N7.75 trillion to complete.

Furthermore, the never ending scams upon scams in the public sector are another fiscal anarchy which has come to stay. After all, no one has been convicted and jailed because there is always a way out for the perpetrators. The painful aspect of it is that perpetrators are celebrated with traditional titles. Fuel subsidy scam is still fresh in our minds with perpetrators walking freely on the street. The recent Police pension scam, discovered 46,000 ghost workers and over N118 billion scam, the Abuja airport runway and Abuja airport road scams, the never ending issues with NNPC with billions of Naira unremitted to the treasury and many uncountable EFCC and ICPC related cases. Where is the law? Where are the judges? Who will punish who when all hands have been soiled? It is expected that perpetrators should be punished, made to return all stolen national wealth and spend the rest of their lives in jail as is done in saner climes, fiscal anarchy, however, would not let justice prevail.

It is indeed a thing of shame that despite outcry from various quarters on Public Procurement Act 2007 and the President’s refusal to constitute the National Council on Public Procurement—various quarters such as NGOs, professional bodies and recently the National Assembly. Also, most MDAs procurement processes are full of malpractices; the rules are never obeyed and no one has been punished since the inception of the Act. But the question that keeps coming to mind is, for how long will corruption fueled by impunity continue to rule over Nigeria?

Fifty three years down the line, Nigerians are still begging for constant power supply, good roads, good leadership, good health system, employment, sound education, alleviation of abject hunger etc. However, it is constant denial of these without which no nation can make meaningful progress that they get in return. Most of our leaders enjoyed free and good education with tens of jobs available to choose awaiting them upon graduation from school, but the present is far from what it used to be. Nothing else is responsible for the suffering reserved for our present generation other than corruption fueled by impunity, total fiscal anarchy and lack of concern for the masses. Our leaders know what to do – “send thief to jail, spend public resources for the benefit of all, implement budget fully, obey the laws and stop impunity which fuels corruption”. All these have been said over and over again. Therefore, we appeal to the conscience of our leaders and various public office holders to act right for the sake of the dying masses.

What You Need To Know About The Boom In Mobile

Can Polite People Be Successful Leaders?