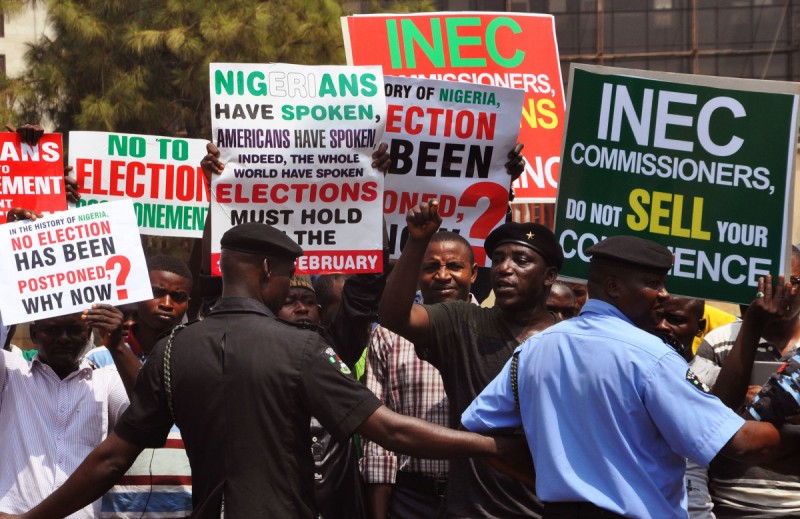 “Thus, I never cared for what Professor Attahiru Jega said, until the question and answer time, which was around 11:30 pm, when a journalist asked the Independent National Electoral Commission Chairman, whether there is any economic cost to the nation, as in price cost of the postponement and Jega looked the man straight in the face and said there is none”.

The time was Saturday the 7th of February 2015 and precisely, about 11:00 pm in the night, where I was witnessing an all important press conference by the Chairman of the Independent National Electoral Commission, where he merely ‘repeated’, what was already ‘announced’ by the Associated Press Agency, since much earlier in the day or to be most specific, it was reported as early as 10:00 am in the morning, by an unknown (presidency) official, stating that the elections has been shifted to a new date of March 28th.

Unlike many a Nigerian citizen, I was not much concerned about the election for purely political reasons, rather, it is from the economic angle that I am much interested in the orchestrated shenanigans in Abuja. Thus, I never cared for what Professor Attahiru Jega said, until the question and answer time, which was around 11:30 pm, when a journalist asked the Independent National Electoral Commission Chairman, whether there is any economic cost to the nation, as in price cost of the postponement and Jega looked the man straight in the face and said there is none.

Mind you, I, that was watching the spectacle, usually turn off the generator by 11:00 pm, which means, I have burnt an added thirty minutes fuel, listening to a press conference, where its convener does not know the value of time in economic management costing. In fact, it was the thoughtless response, which made me to hurriedly go and switch off the generating set, even without listening to conclusion of the now uninteresting exchanges and most importantly, it is the reason why I am disappointed in the postponement of the general elections.

Because, while it is merely ‘postponing the evil day’ for those who are destined to fall and a torturous extension of the incoming day in which to celebrate, for the greatest majority of Nigerians masses and indeed, the general economy itself, the cost is much weightier. In fact, just contemplate and imagine the cost of such uncertainty, to the value of an exceedingly jittery naira or to the highly volatile Nigerian Stock Exchange, where shares have been taking a beating a beating since the beginning of the year, crystallizing in a 12% percent drop in overall value of stocks.

Indeed, just juxtapose the consequences of such national uncertainty, in a nation already in a state of war or at least that is the ‘perception’ out there in world and the declaratory pronouncements rescheduling the polls is confirming and concretizing it. Try rationalizing how a foreign investor, already fearful of the Nigerian business environment, will be ‘reassured’ by the likelihood of an evolving constitutional crisis, where elections cannot hold and most importantly, even the set future time for elections is not a virtual certainty, as operational requirements of conducting military battles, they are simple not projected and estimated with certainty, due to the nature of adversarial armed conflict.

Which means, were the new schedule for the polls to elapse, a constitutional crisis has arisen or to put it in a much simpler form, a nation without a government could be what would stare us in the face. And to confirm what I am saying is not just unfactual scare mongering, by the next working day after Professor Jega’s shifting of the day for election, the All Share Index (ALsi) market capitalisation of the Nigerian Stock Exchange shed about N208.381 billion naira, to close at N9,796 trillion naira, as against last Friday’s closing numbers of N10,005 trillion naira.

Also, in the same Monday the 9th of February 2015, the naira ratio to the dollar took a shocking nose dive, with the naira trading for N196.50 to $1 United States dollar at the interbank market, in fact, by Tuesday business day closing numbers, the naira has fallen to N202.50 naira to $1 dollar. It is most worthy of note, that for the Nigerian naira, one of its key determinants of value is the price of crude oil, which has been going up recently, reaching up to $58 dollar to a barrel of crude oil, thus, normally, the naira should be regaining its value, rather than losing its valour.

It should also be noted, that the National Assembly has been ‘distracted’ due to the election ‘fever’, for it to sit down and pass the budget, thus leaving all economic forecasts and projections to be hanging up in the air. So also is the likely harsh but necessary monetary decisions, which could not be taken in the thick of the election season, the Central Bank of Nigeria has to keep it in abeyance pending the passage of the elongated time for election, besides, which business person can plan, when you do not know the value of naira for next week. But what does this portend for Nigeria, it is very simple to forecast, for an economy slowly creeping into recession, what looms in the horizon is an inadvertent stagnation.

And this two other things:

As I watched Professor Attahiru Jega addressing the press, stating that were it left to the Independent National Electoral Commission, election can be held as of next week but for the fact that the security agencies or to most precise, were it not for the heads of the two armed services, being the Chief of Defence Staff as well as the Chief of Army Staff, who are clearly not ready to ‘back’ the national electoral body and allow for the much anticipated polls to happen. The first thought to come to mind, was whether Nigeria is still operating a ‘constitutional’ democracy, with a single chain of authority and power that flows from the Constitution of the Federal Republic of Nigeria, 1999.

Because, generally and appropriately, a subservient and loyal armed force, only offers advice to the constituted authority, which is either accepted or rejected but, the onus of taking, proclaiming and pronouncing decisions, must lie with the civil authority. Indeed, it is the reason why the name of the Office of the National Security Adviser, has a title ending, confirming its role as a ‘personal’ security advisor to the president, thus only answerable but most especially, ‘loyal’ to the individual occupying the Office of Nigerian President, not necessarily interchangeable and substitutable with being or always acting patriotically in the greater national interest.

Perhaps, it is in the understanding of this constitutional norm and practical conventional scenario, as it operates in the United States of America, which made Senator John Kerry, the United States Secretary of State, in his statement condemning the moving of the general elections to a later date, to ‘ignore’ the contrived warning and advice of Sambo Dasuki to the Independent National Electoral Commission Chairman, which he gave in a Chatham House lecture urging a postponement and a shift in the polling day.

The question then is what should be the next line of action, for an experienced international interlocutor in the mould of the United States Government, that has the latitude and means to punish any errant party and most especially, it had promised ‘sanctions’ in case of breach by any of the two parties. Surely, involving and tainting the military in purely civilian political supremacy games, requires at the very least, a visa withdrawal privilege and barring of such unprofessional and reckless officers from any visit to the United States.

For any student of philosophy and jurisprudence, there is no word that has greater meaning, than the sociological public opinion measure called ‘perception’, indeed, within the more narrow legal jurisprudence, it is said, for there to be an equitable system of the administration of justice, the greater citizenry, “must not only feel that justice was done, it must ‘seem’ to have been done”, thus, it is not only necessary for an umpire (judge) to exhibit fairness, forthrightness and clear impartiality, it should be openly conveyed ‘practically’ unto the viewing and hearing of the interested parties in dispute.

Fortunately, for the Nigerian electoral umpire, it is this ‘onerous’ characteristic that is required of it at all times and to be showered towards every political party, as strategic participatory stakeholder. Unfortunately for the Independent National Electoral Commission, while a judicial courtroom is only required to satisfy the ‘perception’ of its litigants, their relations and interested parties, for the electoral body, it has Nigerian nation as its primary constituency to impress.

Thus, it is not just about ‘satisfying’ the ‘perception’ of political parties but, it must also ‘satisfy’ the perceptive vision of the hundreds of millions of the Nigerian citizenry. The problem that arises here is when an electoral body suspends and postpones the date of an impending election, which by all opinion polls published, has tilted towards an opposition party’s victory, yet it was ‘delayed’ to gratify the ruling party to gain a momentum.

Now, if at the rescheduled polls, the ruling party were to emerge victorious, how on earth, could you convince ‘anyone’, that the election was not ‘delayed’ to achieve a ‘predetermined’ end, remember, majority of Nigerians are neither educated scholars nor men and women of letters or even academically inclined, to rationally juxtapose and reasonable contextualize what had happened and that it is the courtroom, rather than the streets, which could remedy the feeling but most especially, the ‘perception’ of injustice meted out to them.

After all, we are a nation with a known ‘notorious’ history of post election violence, the question is whether anyone, within the cliques of security chiefs, election managers and government officials, had contemplated this cataclysmic scenario, as for me, all I would say is; ‘may God save us from our own contrived follies’.

6 Things to Do Before Making a Big Decision

5 Things Employees Can Do, To Boost Their Earning Potential

Can Nigeria’s Growing Population, Be Regarded As A blessing Or A Curse?