The Four Keys to Being a Trusted Leader 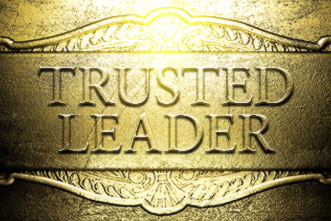 “What safe is, is a place where people come to work not worried about whether they will have a job tomorrow, where compensation is fair, where employees feel that they have gotten a little bit better at their job every day, where they feel there is opportunity to advance and learn, and where their bosses treat them like they are important contributors to the betterment of the organization.  Safe makes a great company.“

Self-aggrandizement and even plain old greed has become standard fare in the executive cafeteria. And yet CEOs wonder why their employees and the public exhibit such a high degree of mistrust toward business and business leaders. The truth lies in the way many CEOs talk and behave.

Real leadership – the kind that inspires people to pull together and collectively achieve something great – can only be exercised when an executive is trusted. And trust arises when someone is seen acting selflessly. This may not sound like news – indeed the centuries-old concept of servant leadership is based on it. But if it also sounds vague and hard to apply to your own leadership setting, let’s break it down further. People in an organization perceive selflessness when a leader concerns him or herself with their safety; performs valuable service for them; and makes personal sacrifice for their benefit.

I still have the watch my grandfather received when he retired after 50+ years working for a trucking company as a staff accountant in western Pennsylvania. I wear it regularly. Today, of course, very few people make it to a ten or even five-year anniversary with a company – why did my grandfather stay 50?  He appreciated the safety of that workplace – and despite what you might want to believe, safety is up to leaders to provide or deny. Safe is not cutting people as soon as there is a dip in the economy.  Safe is not giving raises to a few executives while colleagues languish with small or non-existent increases.  Safe is not producing extraordinary profits while failing to develop a clear career path and development plan for every employee.  What safe is, is a place where people come to work not worried about whether they will have a job tomorrow, where compensation is fair, where employees feel that they have gotten a little bit better at their job every day, where they feel there is opportunity to advance and learn, and where their bosses treat them like they are important contributors to the betterment of the organization.  Safe makes a great company.

If safety doesn’t fit well into our current performance-based business culture, then the notion of leader service fits even less.  The executive mindset is to “win/perform.”  Most executives that I work with love their company and want it to succeed, but very few of them think of themselves as being “in service” to those whose work must make that happen.

The service mindset is uniquely different from the performance mindset.   It isn’t built by an external set of rules or process, but grows from a set of deep-rooted values that are lived minute-by-minute by leaders.  One of the CEOs I work with used a visual device to signal the values he wanted to pervade the senior ranks.  He inverted his Organization Chart, so that the larger group of names –  the people directly serving customers – were displayed at the top of the chart.  The Executive team including the CEO were shown below, signifying that their whole purpose in the organization was to support and serve that crucial, client-serving level.  Not only did this help with executives’ priority-setting, it was motivating to everyone. People do better work for a CEO who they feel is working for them, too.

The idea of personal sacrifice in today’s business environment usually translates to giving up “work/life balance” by travelling a lot and working late – and certainly no one in the ranks who is doing that likes to see the boss putting in fewer hours. (Whether you believe it or not, people know when you aren’t “all in.”) But the sacrifices that matter most are the ones that involve sticking one’s neck out for a colleague or taking a stand that puts one’s political capital at risk. One CEO that I coach used to work for a mid-sized company that had been sold three times in less than two years.  When the third purchaser began the integration process, the new owners wanted him to cut headcount by targeting the staff level making an average $45K/year. But the CEO suggested that the better path to profitability was to trim the executive team, and keep those lower-paid workers in place.  The new owners saw the logic but took it in an unexpected direction by unceremoniously dismissing our hero. Not the best result, but he’ll be okay in the longer term.  In fact, he’ll do better than ever. His sacrifice to keep others working earned him a waiting list of talent eager to work with him in his next organization.

Selflessness, Safety, Service, and Sacrifice.  If finding great people to work with you is key (which it probably is) and you can’t do it all by yourself (which you can’t), then keep these concepts in the forefront of your mind. They will help you build an extraordinary team and produce winning results for your business – and when the time comes for you to retire (with a gold watch or not), you’ll be proud of how you led.

Recounting The Nigerian Civil War: Really, There Was A Country