The Nigerian Military And Their ‘Disregard’ For Human Rights 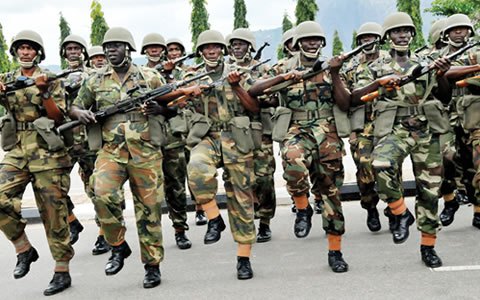 “If you have a right, then others require special justification for overriding or limiting your right. And conversely, if you have a right, you have a justification for limiting the freedom of others in regard to exercising that right. Where lies the rights of the sect members in the face of the carnage they perpetrate? They have shown by all intents that they are blood thirsty and a threat to the nation’s sovereignty. One cannot eat his cake and still have it. By impeding on others right to life, they have declared that they are not deserving of the title of right.“

“The recent claims by the military that they had killed about 50 militants in the counter insurgence campaigns brings to the fore, the apparent failure of our human rights institutions and our apathy to question the moral capacity of an institution or persons to kill a human being without recourse to a full scale investigation into such killings. Without doubt, the military is one of the holders of monopoly of force. However, should that equate to wanton disrespect for human rights and the denial of the right to life of citizens and militants?”

WITH these, Oresanya Oludare in his article, “Nigeria military authorities disregard for human right”, published in the Youth Speak column of October 3, 2013, argued that Nigerian military authorities show no regard for human rights in their counter insurgency campaign, while also bemoan the failure of our human right institutions and the Nigerian citizens to question the morality of such acts. I could not fathom the import of most of his points.

Fair enough, some men of the military often go out of their way to undermine the rights of civilians. Odi massacre is still fresh in the minds of many, not forgetting the Jukun invasion that led to loss of civilian lives. Regrettable is the fact that these actions seemingly have political undertone. Another recent case is that of a young boy who was tortured to death by an army official because his (the army man) girlfriend gave a phone he reportedly bought for her to the boy. His accomplice colleagues offered the boy’s family N100, 000 to allow them to bury his body, with stern warning not to talk to the media. That is the height of human right abuse. To argue as Oresanya did that killing a Boko Haram member —militants he calls them—amounts to abuse of his human right is an admission that he needs serious lectures on the epistemology of human right.

Human rights are rights which all persons equally have simply insofar as they are human. Right gives us special advantage. If you have a right, then others require special justification for overriding or limiting your right. And conversely, if you have a right, you have a justification for limiting the freedom of others in regard to exercising that right. Where lies the rights of the sect members in the face of the carnage they perpetrate? They have shown by all intents that they are blood thirsty and a threat to the nation’s sovereignty. One cannot eat his cake and still have it. By impeding on others right to life, they have declared that they are not deserving of the title of right. And upon this is grounded the great law of nature, “whosoever sheds man’s blood, by man shall his blood be shed”. In the Holy Bible, Cain was so fully convinced that everyone had a right to destroy such a criminal, that after the murder of his brother Abel, he cries out, “everyone that finds me shall slay me”. So plain was it written in the hearts of all mankind. The Aluu killing was a broad daylight evil that was widely condemned. Even the Rivers State Commissioner of Police affirmed that his DPO falsified the report he presented. Nevertheless, the military had no hand in it.

In an insurgency that has claimed over a thousand lives, and had cost the nation enormous resources, the life of a Boko Haram member poses a threat to the lives of over 300 Nigerians. Consequently, if in the counter insurgency operations of the military, the death of a member of the sect unavoidably leads to the death of one or two civilians, then it is justifiable enough. Come to think of it, youths in the affected states willingly joined forces with the military. They know that the notion of human right is an illusion whenever the sect is in town. The Boko Haram members do not regard the rights of their fellow citizens, to make a case for their fundamental human right is, to use Oresanya’s words, “a wasted effort even before commencement of such an endeavour”.

It is inappropriate for any right thinking Nigerian to say that, “we have also systematically believed in our minds that it’s the good guys against the bad guys as such, every action of the government is regarded as good while that of Boko Haram and other entities that challenge the government is seen as evil”. Granted that the government has failed Nigerians, I challenge Oresanya to come up with the one good thing about Boko Haram. The Eastern Nigeria case (Biafran forces) which he cited met all the conditions of jus ad bellum. The Niger Delta militants fought a just cause, though the technique they invented—kidnap—still thrives albeit for the wrong reasons. How these agitations, justifiable as they are, are compared to the unrealistic demands of the Boko Haram beats my imagination. The activities of Boko Haram are unprecedented in the history of Nigeria, just as it is unfortunate for Oresanya to tell Nigerians that they are merely exercising their “freedom of expression”.

I quite agree with Oresanya in questioning the combat and intelligence strategy of the military. The Guardian editorial of October 8, 2013, pertinently echoed this, just as it advocated for a new strategy by the military authority. This is coming after The Guardian of UK, in November last year, published a story titled, “Nigerian Army’s Mali mission stalls amid doubt it can fight”. Demeaning as the story seems, most nations of the world model security management policies on their history, politics and evolution over time. Ours comes in the form of response or reaction to a threat.

Despite these stark revelations, Nigerian military authority deserves better than the accusation of non-regard for human rights. For all available records, and to a reasonable extent, the conduct of the military in the fight against Boko Haram has been nothing short of professional. In a nation where governance has gone haywire, the military remains one of the few institutions that are committed to its cause.

Truly speaking, the virtues and ambitions called forth by an insurgency as Boko Haram are unlikely to find expression in a democracy like Nigeria. We are all absorbed in the mesh of materialism, full of metaphorical insurgencies – artists turning into millionaires in the thriving entertainment industry, who think of themselves as people with ‘swag’, oil magnates who see themselves as masters of Nigeria—but when they sit in front of their TV set or read through the pages of newspaper, they will know somewhere at the back of their minds that there have been real masters of Nigeria, men with the real swag who will feel contempt for the petty virtue required to be wealthy or famous in Nigeria today. Men who are free in the right sense of the word, whose right to life have been nullified by their choice of military life. It is not a mere choice, but one that goes with an absolute moral value, that demonstrates one’s inner strength and superiority to materialism and natural determination. It marks the beginning of freedom and creativity: boredom becomes an anathema, and one is seized by an earnest emotion—Struggle! Struggle!! What matters is the desire to sacrifice and not necessarily the object of sacrifice. The more we understand the dynamics of the military profession, the better we appreciate them.

Democracy has its own prize, and as weak as most of us are, we ought to be mindful of the way we criticise institutions that embody the virtues and ambitions needed for a united Nigeria as well as to protect her territorial integrity. Discipline remains the bedrock of the Nigerian military. For the benefit of doubt, sometime ago, in this our democratic history, some military officials tried to stage a peaceful demonstration over non-payment of allowance after a successful national assignment. They were at once locked up by the authority. Today, institutions embark on strike over workers’ welfare while they sit on their salaries. The beauty of democracy is that it allows for opinion poll. Therefore, in our contributions to national discourse, we should endeavour to think as citizens of a democratic Nigeria and not as thinkers.

Nigeria Future Leaders: Who Is Their Role Model?

8 Ways To Do Away With Your Most Destructive Emotion