Trouble with the curve: What you need to know about curved TVs 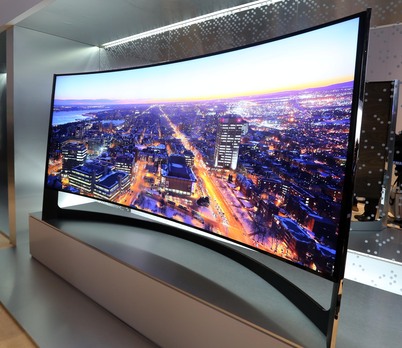 “The curve can be obvious in person and especially in images and video shot from the sides and above, but when you’re watching it from the couch, it basically disappears. At my house, I asked visitors watching the TV whether they noticed anything different about the new TV, and nobody mentioned the curve“.

When curved TVs were first announced last year, we said they needed to be bigger to fulfill the promise of a more immersive image, like that of a curved IMAX screen. On something the size of a living room TV, though, we called it “nothing more than a gimmick.”

Now that I’ve lived with one in my own living room for a month and a half, and spent hours more in the lab comparing it to flat-panel TVs, I’ll say it again with more certainty: The Samsung UNHU9000 has “great picture quality, but the curved screen is a flat-out gimmick.”

1. Curved TVs are more expensive than flat ones. When people ask me why Samsung made a curved TV in the first place, I tell them it’s probably because the company wants to eke profit out of a tough market, where even 4K resolution sets are dropping in price rapidly (and just wait till Vizio’s P series comes out this fall). Any company can make a 4K TV, but only Samsung, for now and with one exception, is offering curved LED LCDs. LG and Samsung also sell curved OLED TVs, one of which I also tested, but their pricing keeps them as niche products for now.

2. The impact of the curve on the picture is subtle, and it provides no increase in immersion. The curve can be obvious in person and especially in images and video shot from the sides and above, but when you’re watching it from the couch, it basically disappears. At my house, I asked visitors watching the TV whether they noticed anything different about the new TV, and nobody mentioned the curve.

Even in my dark AV lab, from a 6.5-foot seating distance and next to an array of flat sets in a variety of side-by-side comparisons, I rarely noticed it — for better or for worse. Colleagues that I invited in also either didn’t notice the curve at all or told me they immediately forgot it was there.

In no case did I notice the increase in “immersion” supposedly brought on by the curve. The image seemed no more immersive than any other 65-inch TV, either in isolation or in a comparison lineup.

3. The curve creates subtle geometric distortions. The most prominent is the slight bow-tie shape, where the edges of the screen seem larger than the middle. It’s most noticeable on letterbox bars and other content with horizontal lines that stretch across the screen, but again, it’s not that obvious from the standard position/distance.

As I moved off-angle, the distortions increased. The near edge seemed larger than it should be, and the middle to far middle seemed too small, before growing again at the far edge. A flat TV also has its own distortions, of course, but to me the ones on the curved TV were slightly more obvious.

4. The curve can help reduce reflections. This is the only picture-quality benefit I noticed. A flat TV “catches” more of the surrounding reflections, increasing the chance that a particularly bright object — like a window or, in my case at home, a sconce in the next room — is reflected back to the viewer. The curved TV misses more of those reflections.

On the other hand, it can actually increase the apparent size of reflected objects it does catch, for example a bright shirt worn by a viewer, stretching them into a fun-house mirror shape my young daughters appreciated more than I did.

Conclusion: The curve is cosmetic

Of course, most of the above bullet points have to do with brass tacks: value and image quality. I also called the Samsung UNHU9000 one of the nicest-looking TVs on the market, not least because of the curve’s unique, futuristic look.

Ultimately, the curved screen, at least on Samsung’s 2014 LED LCD TVs, becomes a cosmetic choice that doesn’t appreciably change the viewing experience. If that look appeals to you, that’s fine; just be prepared to pay a hefty premium for it. If you want a more immersive TV however, your money’s better spent getting a larger one than following the curve.

From Imo to Abia, Edo…. then Ekiti – Rise Networks Continues in its Spread of “Hands on Skills” Revolution

Introduction Of Gmail New Tabs: Why Marketers Are Worried