What’s Next For The Cloud? The Intercloud 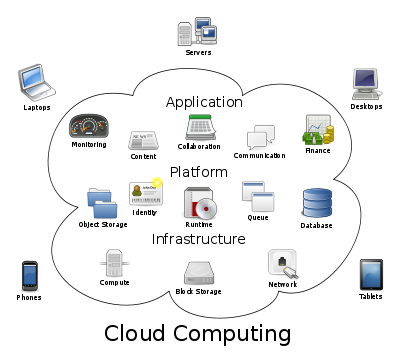 “Today, we take for granted that heterogeneous network technologies and network service providers can interoperate through, e.g., the Internet.  For example, you may be reading these words right now over a DSL, cable, fiber, hybrid fiber coax, or cellular network. Tomorrow we may take for granted that heterogeneous cloud offers will interoperate via the Intercloud. What business scenarios and benefits might we expect for service providers and customers from emerging Intercloud standards?“

Cloud computing products and services from Amazon, Google, Microsoft, and Rackspace as well as companies ranging from AT&T to Zuora are clearly gaining traction, growing at a 36% CAGR, according to one recent forecast. As cloud computing becomes pervasive, customers will need to determine how various cloud components from various companies will work together to meet business objectives. The IEEE—”the world’s largest professional association for the advancement of technology,” and the one that standardized Ethernet (IEEE 802.3) and Wi-Fi (IEEE 802.11)—has brought together industry and academia to help develop Intercloud standards as part of its Cloud Computing Initiative and today announced an effort intended to test those standards under real-world conditions.(Disclosure: I am the chairman of the IEEE Intercloud Testbed executive committee)

The cloud computing market is evolving rapidly. Every day seems to bring price cuts, new features, broadened portfolios, new entrants, new rounds of funding and IPOs, enhanced reliability, better management capabilities, or new partnerships. But beyond new service providers and enhanced feature sets, the industry is also evolving as other niches of a robust ecosystem become fleshed out. By way of analogy, the airline industry, broadly speaking, comprises more than just airlines; it includes travel agents, air travel web sites, charter operators, travel insurers, food and fuel service companies, tour operators that bundle and/or white label carriers, airport concessions, and so forth. Perhaps more subtly, even if none of those third parties existed, airlines would still want or need to be able to codeshare, coordinate air traffic to minimize fuel costs and collisions, and efficiently transfer passengers and cargo to each other. The cloud computing industry is not much different.

Although now perhaps taken for granted, multilateral organizations such as the International Air Transport Association and International Civil Aviation Organization were and are needed to propose and gain consensus around mechanisms such as standard addressing for resources (airport codes such as SFO, LAX, and JFK), service provider identification (airline codes such as UA and BA), and tower communications (the English language and the NATO Phonetic Alphabet, i.e., Alpha, Bravo, Charlie, etc.). Some airlines, such as those in the STAR alliance, are federated, offering a tighter level of integration, e.g., cross-airline frequent flyer perks. Similarly, cloud service providers, customers, and third parties are likely to benefit from a variety of standards, interoperability, communications, and federation mechanisms.

Practically from the day the first cloud offering was announced, third parties arose to complement, monitor, and select from among multiple service providers. As I predicted back in 2007, a variety of interesting financial intermediaries have arisen as well. Capital-intensive facilities motivate yield management, which drives dynamic pricing. This introduces price volatility, which customers may attempt to mitigate via derivatives such as options, which in turn require some degree of normalization of the underlying resource. One can’t efficiently price, trade, or hedge oil unless one knows whether it is West Texas Intermediate or Brent Crude; similarly, it’s helpful to normalize measures of storage, compute, and network bandwidth.

Firms such as 6fusion, ComputeNext, Strategic Blue (Cloud Options), and Zimory are beginning to offer a variety of resale, broker/dealer, normalization, and derivatives services complementing the core service providers.  These are not just some wild-eyed kids “borrowing” their Mom’s credit card; 6fusion and CME Group have announced a letter of intent, and Zimory is partly backed by Deutsche Boerse, which runs the Frankfurt Stock Exchange.

Today, we take for granted that heterogeneous network technologies and network service providers can interoperate through, e.g., the Internet.  For example, you may be reading these words right now over a DSL, cable, fiber, hybrid fiber coax, or cellular network. Tomorrow we may take for granted that heterogeneous cloud offers will interoperate via the Intercloud. What business scenarios and benefits might we expect for service providers and customers from emerging Intercloud standards?

One cloud provider might be able to virtually extend its physical footprint (think airline codesharing) by leveraging facilities investments made by another provider, even dynamically provisioning computing resources in real time.

A cloud provider suffering from an outage or insufficient capacity might be able to transition existing customers to a competitor, the way one airline might rebook a passenger with a competitor if experiencing a maintenance issue, flight cancellation, or overbooking.

A customer would easily be able to run an application requiring more than one provider, in the same way that a passenger traveling from New York to Seoul might combine services from United Airlines and then Korean Air, transferring at a neutral interconnection point such as Tokyo’s Narita airport. In the compute world, carrier neutral interconnection and colocation facilities are often the “airports” that enable such handoffs (Disclosure: my employer Telx does just this).

Customers would be able to compare cloud providers total offer and select one with the best combination of price, performance, availability, and so forth, the way a traveler might use Travelocity to trade off total price including ticket, taxes, and baggage fees, departure time, arrival time, number of stops, total travel time, and reliability (e.g., % on-time arrival), etc.  Even a simple directory listing service providers that could meet requirements would be helpful; in the same way that it may be necessary to determine which carriers fly to, say, Istanbul.

Cross-provider bundles and workflows would benefit from Intercloud standards and mechanisms as well.  Today, tour operators (“aggregators”) put together hotel, airline, train, bus, and cruise ship services into a single bundle (say, “The Mediterranean Like You’ve Never Seen It Before”) and manage the flow of customers across those services (the helpful people guiding travelers from baggage claim to the bus that takes them to the cruise ship).  Complex information technology applications and “mash-ups,” requiring, say, credit card validation and billing, scanned-image-to-text optical character recognition, secure messaging and the like, could be composed from base services offered by a variety of best-in-breed operators.

Even if not bundled, virtual operators could easily resell physical cloud provider services, perhaps offering a greater degree of intimacy or solution engineering than core providers might want to. This is not dissimilar from a human travel agent selling a ticket. After all, they don’t actually run an airline, but can still offer value-added guidance.

“If you love something, set it free,” as the saying goes.  Cloud providers will likely benefit from greater customer flexibility to migrate workloads and data to competitors, by eliminating fear of lock-in as a barrier to cloud adoption. Just as airlines (try to) ensure proper baggage handling, “reliable application transport” in the Intercloud will ensure that data and applications are correctly transferred across providers.

A variety of emerging businesses, academic institutions, and industry bodies are bringing this vision to life.  To be sure, there are many details to be worked out. For example, airlines can presumably agree on the time of day, so as to ensure that a passenger doesn’t have a scheduled connection departing before the prior flight arrives. However, in the world of distributed computing, such agreement can be non-trivial. Early researchers and inventors of the Internet, ARPANET, HTML, and the browser probably didn’t fully envision Snapchat, YouTube, Facebook or Twitter, so it is difficult to predict exactly which Intercloud scenarios will gain the most traction and which ones appear promising but will die on the vine. However, it does seem clear that increasing cloud adoption is driving a rich ecosystem of industry players and initiatives that will usher in the next wave of the cloud. In the same way that online ticketing sites and interline baggage handling enrich the usability of airline services, rather than supplanting them, the Intercloud offers the promise of enhancing the customer benefits of the cloud by complementing and facilitating cloud vendor products and provider services.

You Make Better Decisions If You “See” Your Senior Self