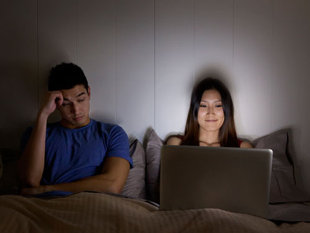 “That family phone at one point acted as a gatekeeper. You couldn’t just call a married individual of the opposite sex without also talking to that person’s spouse or kids. You were constantly reminded that the person was part of a larger unit. You had no real way to pursue a more personal relationship unless you did so deliberately. Today often innocent texts can turn into something more.“

It’s 1975 and Mr. Company Manager needs to talk to Ms. Sales Manager about an account. It’s after hours, so he picks up the phone and calls her at home. Her husband answers. The two chat for a bit about the latest Maple Leafs’ loss, and then husband passes the phone to wife.

It’s 1982 and Johnny Doe is driving through his hometown when he passes the old “make out bridge”. He has fleeting thoughts of Mary Jane, with whom he often frequented that spot. But he doesn’t look her up, because he has no idea where she is. She’s probably married anyhow.

Now it’s 2013, so let’s redo all of those scenarios. Mr. Company Manager texts Ms. Sales Manager about the account. They banter back and forth, in texts that grow increasingly personal. He never actually talks to Ms. Sales Manager’s husband, and thus often forgets the man exists.

Miss Recent Law Grad texts Mr. Lawyer Partner while he’s watching gymnastics. She’s never talked to the wife. She knows vaguely that he has a few kids, but they’re not real to her. But everyday she and the partner text back and forth at least a dozen times. They’re becoming good friends.

And Johnny Doe? He found Mary Jane on Facebook a couple of months back. They’ve been privately messaging for a while now. She’s been married for 23 years, but she feels dissatisfied. “Talking” to Johnny reminds her of those exhilarating times when she was young and felt desirable and the future was all open to her. Her husband has no idea that she’s found Johnny again.

Technology has completely changed the way we interact, and I don’t think it’s always for the better. Sure I appreciate being able to text my daughter when she’s late, rather than plotting revenge for making me worry. I appreciate being able to text my husband to ask him to pick something up without having to fret that I’m interrupting him by calling. Texting is a wonderful tool.

But it can also obscure true relationships.

That family phone at one point acted as a gatekeeper. You couldn’t just call a married individual of the opposite sex without also talking to that person’s spouse or kids. You were constantly reminded that the person was part of a larger unit. You had no real way to pursue a more personal relationship unless you did so deliberately. Today often innocent texts can turn into something more.

Or take Facebook. According to the Loyola University Health System, it’s implicated in 20% of U.S. divorces. You can flirt with someone while sitting next to your spouse! He’s watching football; she’s messaging Johnny.

We can’t turn back the clock on technology, but I do think every married couple needs to establish boundaries that clearly tell the outside world “we are a unit”. Several of my couple friends have a combined Facebook account. Others have a “no texting during family time” rule, or a “both spouses always know the password to the phone” rule. Marriage is tough enough without other people driving a wedge. So talk to each other. Set boundaries. Get to know your spouse’s co-workers. And above all, never stop working on your marriage.

Are You A Writer? Our Youth Speak Online Community Welcomes You